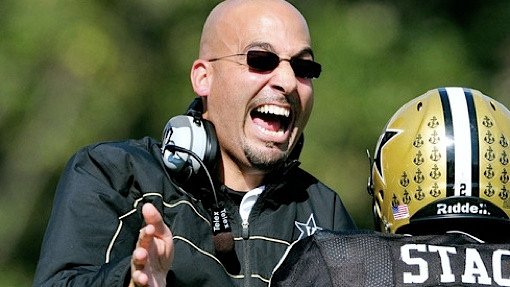 Vanderbilt head football coach James Franklin (Oh, you didn’t know Vanderbilt has a football team? Why, they just won their conference championship in 1923!) received some less-than-positive publicity recently when he told a local radio station that he “will not hire an assistant until I see his wife. If she looks the part and she’s a D1 recruit, then you’ve got a chance to get hired. That’s part of the deal.”

His reasoning? Any dude with a hot wife must be both confident and a great persuader — in other words, the kind of guy who can convince high school recruits to actually choose Vandy. Shockingly, not everyone agrees. As Brian Gearity at the Hattiesburg American points out, Vanderbilt probably doesn’t love hearing its hiring policies in such a lawsuit-friendly way. And if you’ve ever read or seen Moneyball, you know that the crusty old scouts were mocked for basing their evaluations of players in part on the attractiveness of their wives and girlfriends.

That said, keep in mind that those scouts were the guys who drafted the likes of Jason Giambi, Mark McGwire, Jose Canseco, and … well, plenty of other future stars who weren’t embroiled in steroids scandals. Point is, despite what the movie portrayed, A’s scouts were hardly incompetent.

So does Franklin have a point? We don’t know — what are we, social scientists? But we will say this: Bill Clinton is one of the most persuasive, confident guys on the planet and presided over what were, all things considered, eight pretty awesome years as president. He is married to Hilary Clinton. Nicolas Sarkozy is the former president of France who was so reviled that he was just ousted in favor of a socialist. (Yes, it’s France, but still.) He is married to gorgeous model and actress Carla Bruni.