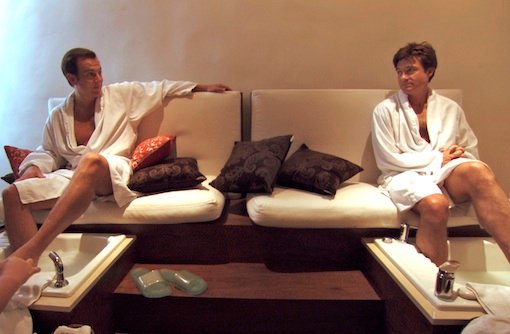 The slightly unsettling term “manscaping” has been around for a while, and it’s no secret that women prefer it when dudes keep certain body hair in check (no one wants to see a luxurious coif shooting out of your nose, pal). But these days, guys are worrying about their grooming habits more than ever. But how much is too much? The thought of getting waxed alongside my boyfriend really, really grosses me out — so that’s too much for me. In fact, I think the best way to define “too much” is by asking women for their opinions; after all, you don’t worry about the hair on your shoulders because you think your bros will be grossed out by it. So I asked women to weight in. Read on to find out which parts of your body you should maintain and which ones you should leave well enough alone.

YOUR BACK
If there’s enough fuzz back there for her to hold onto, the general consensus amongst womankind appears to be, “Ew!” That said, it would also be wise to keep your appointment with Svetlana the Waxist under wraps. “If a dude has a grody, hairy back, I’d want him to take care of it, but I wouldn’t want to actually know that he waxes it,” says Karen, one of the many chicks I talked to about this very subject. You know how you’d prefer women didn’t burp or fart around you to maintain the illusion that we’re all a bunch of gasless fembots? We don’t want to know you get your back waxed to maintain the illusion that you’re a rough-and-tumble mountain man … who just happens to have a hairless back.

Also: How Chivalrous Should You Be?

YOUR CHEST
The feminization of dudes seems like it’s at an all-time high right now — you guys are downward dogging next to us in yoga class and flanking us in the pedicure chair. And while we appreciate a zen dude with not-nasty feet, at the end of the day, we still want to feel like we’re crawling into bed with a man. And chest hair is the ultimate indicator of manhood. “As long as it’s not a magic carpet, I like the feeling of a little hair against my cheek when I rest my head on a man’s bare chest,” says Erica. So don’t let Svetlana near your pecs, and if you require a little tidying, use trimmers to tame the beast.