Several years ago, as a participant in the cancer-fighting charity Movember, I tentatively put the razor away for a month — and was surprised to discover that, yes, moustaches are cool again. No, really. Now in my fifth Movember season, I’d like to share a few lessons I’ve learned about growing a mo.

1. PICK A STYLE
According to the American Mustache Institute (it exists), there are 13 distinct moustache varieties. I’ll spare you the Pencil (a.k.a. the John Waters) and the Toothbrush (a.k.a. the Hitler, a.k.a. the Michael Jordan) in favor of a few easy-to-execute options for the first-timer.

Chevron
The Look: A thick bar of hair reaching to the edges of the lips.
It Says: I’m all business. And possibly an undercover cop.

Handlebar
The Look: Hair extends an inch or two past the lips and is groomed with styling wax to curl back toward the nose.
It Says: I take great pride in my moustache. Also, I am quite dapper.

Horseshoe
The Look: A Chevron with straight lines down to the chin.
It Says: I’m not a long-haul trucker, but I play one on TV.

2. GROOM WITH CARE
These styles don’t just happen by themselves. First, you need to spend a week or two growing a beard to lay down a good base. Then, depending on how powerful your hormones are, use the trimmer you’ll find on the back of most electric razors to loosely shave around the area you want to keep. Finally, bust out your standard five-bladed razor for the detail work. Err on the side of big-ness, and shave every morning to keep your ’stache strong and defined.

A couple of years ago at the World Beard & Mustache Championships, I asked every handle-barred fellow I saw what styling product he favored. The best recommendation I got was from Colin Rowe of Los Angeles: “Another guy turned me on to Firehouse Mustache Wax. He had a handlebar, he did a triathlon, and through all the biking, the swimming, the running, all the sweat and wind, his mustache stayed motionless. It was perfect at the finish line. That convinced me — I switched.” So yeah, Firehouse. 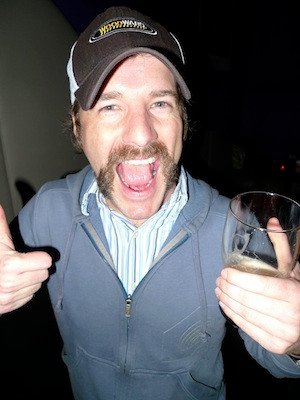 3. KEEP IT PROFESSIONAL
The trickiest thing about growing a mustache is operating in the working world. Even though very few workplaces have explicit rules about moustaches, any sort of job requiring a button-down shirt tends to carry with it an implicit message wild facial hair isn’t encouraged. But assuming you’re not in, say, the Marines, a bold moustache can actually help you. Easy for me to say, since I don’t work in an office (That’s Steve to the left, probably at 2pm on a Wednesday.—Ed.) but another guy at the WBMC, Benjamin Juergens, rocks a big curly ’stache while working as an aerospace engineer and says, “A lot of people really respect it. You walk into a business meeting, and they’re like, ‘Wow, look at that guy!’” Provided you confidently own your look, it gets you noticed. You just need to pair it with actual competence.

4. GET MO ACTION
Remember what I said about owning it? That same advice applies when it comes to the opposite sex. Sure, there are girls who hate fur on the face, but women who like moustaches really like moustaches. And since they’re found on a very small percentage of dudes who aren’t trapped with malevolent shape-shifting aliens on Antarctic research stations, you don’t even have to chase those hotties. You just have to keep your facial foliage in tip-top shape and wear it proudly. As Rowe explains, “If you’re trying to talk to a woman, it’s always, ‘How do I introduce myself?’ Well, I don’t need that. They come up to me, and they always have the same two questions: Is it real? And can I twirl it? The answers are yes and yes.”

(Steve Mazzucchi is the Managing Editor of MadeMan.com and a longtime Movember participant. For mo info about Movember, check out Movember Central.)