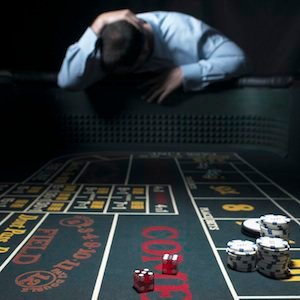 If you’re single, it’s no big deal — you just go without luxuries like vegetables and toilet paper for a few months. But if you’re married or living with someone, it can be an … issue.

Trust us, “Hey, it’s my money!” is not going to smooth things over. But these 5 tactics will.

1: DON’T ASK, DON’T TELL
Although DADT no longer works for our boys in uniform, it’s still a valuable tool in a serious relationship. Provided you’re not refinancing the house, a policy of mutual silence on the subject of your Vegas losings can solve lots of problems. Of course, this policy often isn’t adopted in relationships, so …

2: BUY HER OFF
Even if you’re married to a hippie vegan organic farmer in Oregon, she still won’t be able to resist a flashy gift. Set aside part of your bankroll to buy her something nice and it’ll soften the blow. (Note: A rhinestone-covered t-shirt from McCarran Airport doesn’t count.)

3. PREACH THE GAMBLING GOSPEL
If you involve her in the process before you even leave for Vegas, she’ll be more understanding of losses. Bring her to a charity poker tournament, or explain why George Mason’s inability to cover 10 points has you so cranky. If you’re lucky, she’ll either be kind of into it or bored out of her skull. Meaning, she’ll either better understand your losses, or not want to bring it up for fear of another explanation of odds.

4: CONTEXTUALIZE
Every bankroll has an “EE,” or earnings equivalent, and you should stress that. Suddenly, the $1,000 you lost playing Keno becomes nothing more than a few days of (gross) pay!

5. BLAME OTHERS
Your friends always have your back. So feel free to tell your wife or girlfriend that you spent so much money because you were forced to keep up with their desire to eat at spendy restaurants, golf at pricey courses, and tip like crazy at, uh, the spa. She doesn’t have to know that you actually bet every dime.

Let’s check out if bitcoin is a better investment option or not!

Are you confused about different cryptocurrencies? Here’s how you can make the right choice!