DAY 1: THE TV PLAY-IN GAME FOLLOWED BY THE FIRST ROUND OF THE STALLONE REGIONAL
(Click on the bracket for a closer look.) 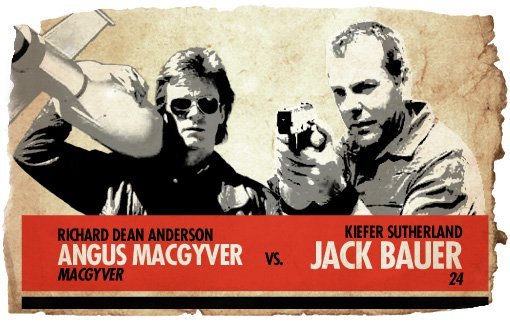 In this TV play-in match, a pacifist longhair with a physics degree tangles with a grizzled counter-terrorism agent who’s a former Ranger, and we have no idea how it’ll end! Just kidding — it’ll end with a hippie eating fist meat. While MacGyver tries to cobble together some vegan stun powder or whatever he can concoct with his precious “science” and Swiss Army knife (’sa matter, U.S. Army knife not good enough for you?), Bauer is standing at rock-hard attention with a SIG P229 service pistol trained on that liberal mullet. Countering science with Fox-powered faith, Jack flattens Mac like naan-violent resistance bread.
WINNER: JACK BAUER It’s like fighting your shadow: two expertly trained Special Forces grads, for whom killing is as autonomic as breathing, square off for all the marbles they lost being turned into relentless killing machines. In what many regard as an upset, Bauer senses a signature Rambo backside attack, counters with a flurry of network-television punches that almost look like they connect, and fells J.R. with a furious neck chop before ripping out his throat and pleasuring himself with it. (Different people deal with post-traumatic stress disorder in different ways. No judgments.)
WINNER: JACK BAUER 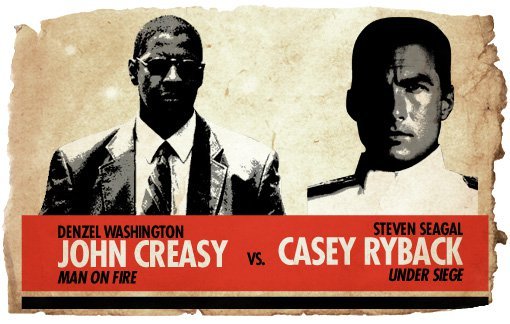 Billed by promoters as “Creasy vs. Greasy,” Denzel’s erstwhile recon marine duels Seagal’s former Navy SEAL. In fact, in both form and viscosity, Seagal is starting to resemble an actual seal. That benefits the portly pugilist early, as Creasy struggles to get his hands on the master of kung food. Until, that is, Creasy uses Ryback’s seemingly self-lubricating physiology to complete his signature finishing move: inserting a capsule full of plastic explosive in the ol’ dung oven. It turns the nebulous chef into white-soul soufflé.
WINNER: JOHN CREASY What these man-machines have lost in humanity, they more than make up for in inhumanity; their collective trail of dead/undead victims numbers in the thousands. But when RoboCop tries to throw the book at S-Mart’s hard-boiled housewares attendant, Ash throws the Book of the Dead right back at him. He follows several well-timed rounds from his boom stick by plunging his wrist-mounted chainsaw through RoboCop’s face hole — why the hell did they construct him that way? And so, Ash re-kills former officer Alex J. Murphy, who nevertheless thanks him for his cooperation.
WINNER: ASH WILLIAMS Girl fight!!!1! A Deadly Viper assassin would seem to have the advantage over the warrant officer of an interstellar tug ship. But Ripley’s used to battling angry, vengeful mothers — even if they’re armed with a Hanzō sword and a $200 haircut — and so keeps The Bride at a distance with artful cunning and a hand cannon the size of a Yugoslavian sedan. Before Black Mamba can even get within range to apply the Five-Point Palm Exploding Heart technique, Ripley pops a cap in her airlock and then dumps her body in the flatbed of the Pussy Wagon.
WINNER: ELLEN RIPLEY