If you haven’t seen Making a Murderer on Netflix we suggest you do so. Like, right now. Call in sick, leave church abruptly, slam on your breaks on the highway and get out of the car — doesn’t matter. The series is well done, gripping, and designed to get you to consider how our justice system really works, particularly in areas of the country that typically don’t receive the type of scrutiny they receive in this docuseries that took 10 years to complete.

We won’t spoil it for you … actually, screw it, yeah we will: A dude named Steven Avery that was locked up when he was 18 for a rape he didn’t commit. After spending 18 years in prison he gets exonerated of the crime via new DNA evidence. All is well … until 2005 when he’s locked up again two years later for murder under some shady circumstances with some shady sheriff’s department employees involved. Was Avery framed by the sheriff’s department for a crime he didn’t commit? Are you getting the entire story? Probably not, but it’s enough to provide you with mixed feelings about how the system works (or doesn’t).

Now, the worst thing is that Teresa Halbach, who was only 25 years old at the time, was killed. Without that happened, this docuseries never gets made. This fact often gets overlooked because the series has blown up so much — like, Justin Bieber pissing in a mop bucket type of commotion. And that, of course, means the folks on the internet have made a few memorable Making a Murderer memes. Here are some of our favorites … 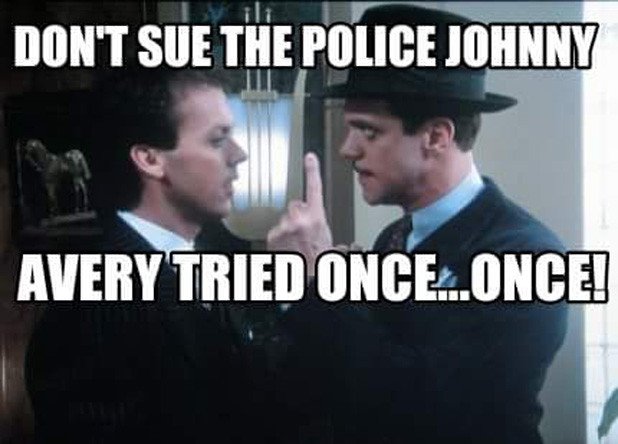 Steven Avery has claimed he’s an innocent man that’s wrongly convicted for taking on the Manitowoc County Sheriff’s Office for his wrongful conviction. (Although new evidence also suggests Avery may have believed his brothers had something to do with Halbach’s death, as well.) At the time, Avery was suing the MCSO for $36 million, and then was arrested under what many — ahem — would consider suspicious circumstances.

This is more of a reenactment than a joke, sadly — during an eight-day search of the Avery home police found the victim’s car key next to a pair of slippers out in plain view … on day seven. Evidently, nobody saw it at any point during the search, despite the area the key was found being searched prior to finding the key. Oh, and it was found by a member of the sheriff’s department that was allegedly involved in the first cover up. Seriously.