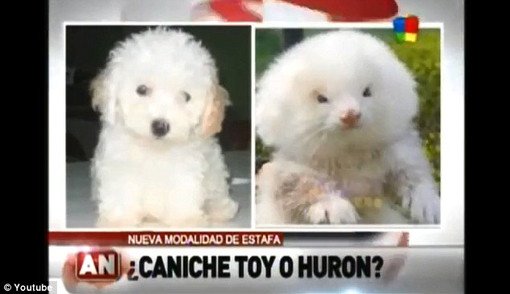 Everyone loves a bargain. So we understand why an old man looking to buy new dogs dove at the chance to pick up two fluffy and adorable toy poodles for the rock-bottom price of $150 each at Argentina’s largest bazaar. It’s like, what could possibly go wrong when you’re buying a top-of-the-line pedigree animal at an outdoor market for the cheapest prices imaginable?

The “dogs” turned out to be ferrets that had been jammed full of steroids since birth to give them more size; and their primped hair was done up all nice and pretty in order to pass them off as poodles. The old man later suspected he’d purchased juiced-up “Brazilian rats” (what locals call ferrets) after the “pups” repped out push-ups for six straight hours. Okay, that’s not what did it. Look at the photo with the funny lettering on it that’s at the top of the page — that comparison is most likely what did it. The dude’s veterinarian later confirmed the dogs were actually giant rodents with back acne.

Typically the poodle pups can fetch around $1,000 in the United States. Ferrets? About $75. Ferrets on steroids? Not sure. Maybe Lance Armstrong knows.