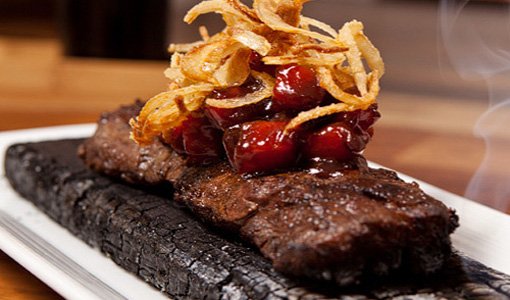 Have you ever thought to yourself, “Gosh, there just aren’t enough parts to eat on a cow.” So have we. That’s why we were elated to hear that some culinary genius has somehow discovered a new cut of meat and dubbed it the Vegas Strip steak. Thankfully, the new cut doesn’t taste like cheap hooker perfume and penniless failure; instead, it’s being compared to the New York Strip. Exactly where one the cow the new cut originates hasn’t yet been made public, but the steak is said to weigh about 14 oz. and can be divided into 4 oz. servings if you’re merely looking for a pre-steak steak snack. Testers who got a sneak preview at a private dinner in Chicago reportedly loved the taste. Still no word when it will be ready for mass consumption.