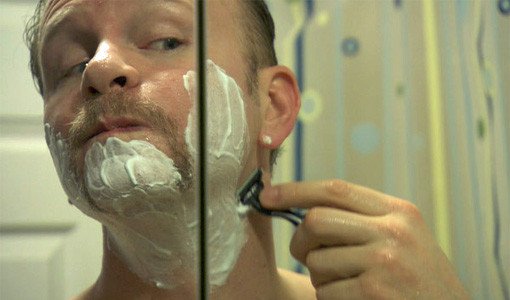 Mansome is a new, somewhat confusingly named documentary by Morgan Spurlock, the Oscar-nominated filmmaker best known for 2004’s awesome fast-food takedown, Super Size Me. His latest movie asks a hairy question: How much grooming should dudes be doing? He gets opinions from all sorts of people, from normal folks to industry insiders to celebrities like Zach Galifianikis, Adam Corrolla, Paul Rudd, and Judd Apatow. And rest assured, he gets grooming input from plenty of women too.

The film starts strong and delivers several laughs. Spurlock decides to shave his handlebar moustache, which reduces his son to tears. Jason Bateman and Will Arnett — who are the movie’s executive producers — invite cameras with them while they kick back at a posh Los Angeles spa. And we get to watch a guy strive to earn the title of best beard in the world at various beard pageants, which exist.

However, for some strange reason Spurlock abandons the comedy about halfway through the movie. As a result, Mansome begins to crawl. Watching the guy who created the product Fresh Balls discuss sweaty groins with a focus group, some old guys talking shop about wigs, and the hairiest pro wrestler ever shave his body gets old quick. And in the end, the movie doesn’t really answer the question of how much men should groom. Then again, maybe that’s not such a bad thing. Whether you’re a beast with a back like a gorilla, or a pretty boy with his personal waxer on speed dial, you should groom however you want without worrying about what other people — aside from maybe some women — think. After all, isn’t that what being a man is all about?