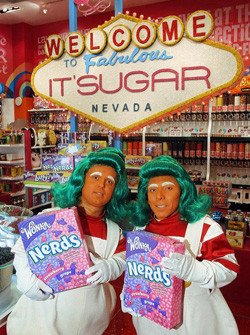 If your diet consists mainly of doughnuts, soda, and IV bags dripping high-fructose corn syrup (HFCS) directly into your veins, chances are you may have problems with acne, being overweight, and the dreaded diabetes. But now scientists have concluded that there may be yet another risk associated with treating sugar like a food group: It may be making you dumber.

Researchers at UCLA trained rats to run a maze before breaking them into groups and changing their diets for six weeks; one group was given HFCS-spiked water, the other got the same beverage plus additional omega-3 fatty acids, which protect against brain cell damage and are found in foods like walnuts, shrimp, salmon, and tuna.

The rats with more omega-3s were faster and more efficient at running the maze than their sugar-addled counterparts. The experiment showed that consuming too much high-fructose corn syrup for too long can disrupt learning and negatively affect memory. On the plus side, omega-3 fatty acids can help minimize and even reverse the damage. So since it’s next to impossible to pry the Pixy Stix out of many people’s fleshy mitts, they should at least think about augmenting their diets with omega-3 supplements.

Due to the security standards and incredible returns, everyone wants to deal in bitcoin. However, to trade...