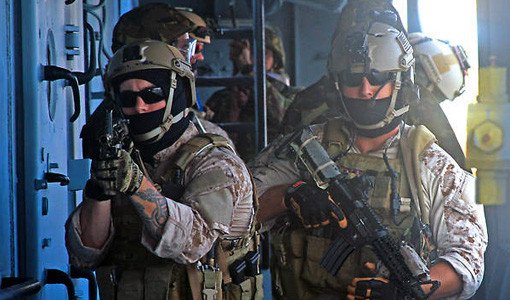 If you don’t already know the gritty details of last year’s daring raid on Osama bin Laden’s compound, you’re not a card-carrying American: In May 2011 a team of Navy SEALs stealth-helicoptered into Pakistan. One of the helicopters crashed, and as the SEALs came under and returned fire, they made their way first into the compound, and then into bin Laden’s bedroom, where he returned fire. He was subsequently shot and killed.

That’s according to No Easy Day, written by SEAL Mark Owen — that’s not his real name — who was reportedly present when bin Laden died. Turns out bin Laden wasn’t armed and didn’t resist — in fact, he was already dying of a gunshot wound when the SEALs entered his bedroom. “The raid was being reported like a bad action movie,” Owen writes.

And we found even more less-than-thrilling details in his book!

• “We had strict orders: Wipe your feet before entering the house. We tried to comply, but the welcome mat was absolutely filthy.”

• “SEALs are trained to go long periods of time without sleep. Still, after the compound was secured, we decided to grab some coffee. But all that monster had was Sanka. It really hammered it home — bin Laden cared nothing about human life or the small joy a delicious cup of quality coffee can bring.“

• “Based on the position of bin Laden’s body relative to a rickety card table, he was getting killed at cribbage right before he got actually killed.”

• “There’s no telling what sorts of scum bin Laden had working for him, so we weren’t surprised to see that the geraniums clearly hadn’t been watered for days.”

• “The bathroom sink was covered in beard hair. Gross.”