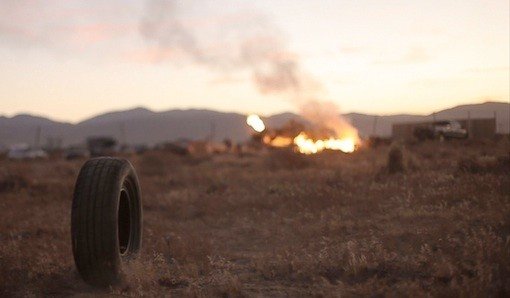 Put simply, Rubber is the best killer-tire movie ever made.

Okay, it’s also the only killer-tire movie ever made, but you get the point. Here’s the premise: Out in the desert, a lone black tire somehow stirs to life, sputters around, and then begins to roll toward a town. “Ridiculous!” you may say. But we’re not done. The tire also possesses psychic energy that allows it to inflict damage on anything it comes across. It starts out small by knocking off birds and scorpions, then moves on to bigger and better things — like people. It’s preferred method of dispatch? Making heads explode.

No killer-tire movie would be complete without a love story, and so Robert becomes smitten with a mysterious young woman he comes across at a motel. He then begins exploding the noggin of anyone who gets between him and his gal. Meanwhile, an audience of people who are for some reason out in the desert serve as a Greek chorus, commenting on the inanity of Rubber and of movies in general. Admittedly, these scenes are kind of artsy-fartsy and sadly take away from the awesomeness of a movie about a tire that can make people’s heads explode.

There are several ways in which to approach Rubber, which is a fairly unique bit of cinema. Director Quentin Dupieux seemingly wants to make some kind of meta-statement about the movie industry or deconstruct the slasher flicks of the 1980s. Forget that nonsense. The best way to enjoy Rubber is to simply roll with it.