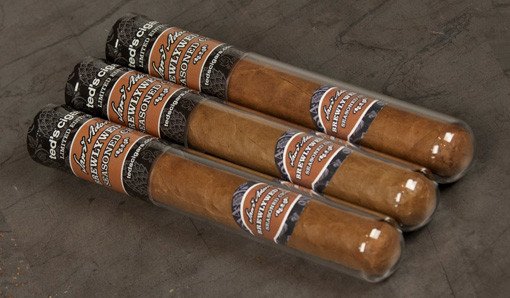 We don’t smoke cigars often. And that’s because we already suffer from beer breath and morning breath, and we have an incurable penchant for eating turd sandwiches at lunchtime. However, we also know it’s never a bad idea to have a few cigars on hand to celebrate something cool like a promotion or engagement announcement.

Also: How To Smoke A Cigar (For Noobs)

Alternatively, cigars aren’t a bad thing to have around if you’re lamenting something terrible, like a layoff or death announcement. Basically, you never know when you’ll want to puff on a stogie, so having a few available can only hurt your lungs, not your mood. And we think beer lovers will dig the Samuel Adams Brewlywed Ale Cigar ($11), which are seasoned with Sam Adams Brewlywed Ale and feature Australian hops to provide a distinct flavor.

Here are some stats on the Samuel Adams Brewlywed Ale Cigar:

A Relationship is a Two Way Street

Relationships are complex and require effort from both parties in order to be successful. It’s important to remember that it takes two...

When Your Child Touches You Inappropriately – What to Do

How to See Who Your Boyfriend is Texting for Free