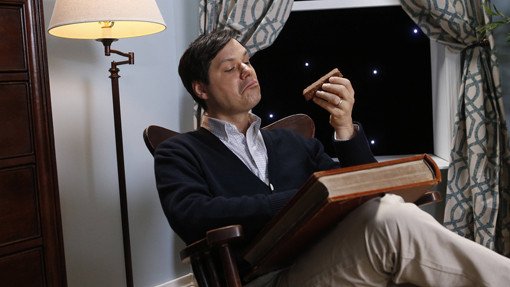 During a PR push for Klondike Kandy Bars, stand-up comedian, author, and TV personality Michael Ian Black spoke with us about how a bill becomes a law. Okay, he didn’t. But he did talk about Klondike Kandy Bars (it’s a paid gig, after all), dealing with failure, his secret to writing hilarious tweets, and the power of honesty.

Do you remember the worst time you bombed on stage doing stand-up?
I did a show with some friends at a college in Brooklyn when I was first starting out and maybe 12 engineering students showed up. A terrible magician was also performing. I don’t know what the problem was, but it’s possible that the audience didn’t speak English. Or that I was terrible, but it’s safe to say that the magician did way better than me.

You have two kids. What’s something you think a guy should do before becoming a father?
Impregnate somebody — that’s the best way to become a dad. It’s different for everybody. I was never like a crazy guy, but I did go skydiving. It was something I did before I had kids. I still do selfish stuff everyday, just nothing that might kill me.

In show business you have to deal with failure often — like when you don’t get a part or a show you’re on gets cancelled. How do you deal with career setbacks?
Eventually, if you stick around long enough, you realize that there are highs and lows in every career. And if something bad happens, you take it in stride and recognize that eventually something good will come along as well. And if it doesn’t, you got to work at Starbucks.