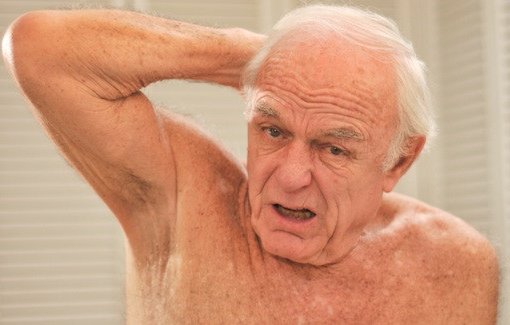 If you’ve ever wandered down the haunting corridor of a nursing home — or if you’ve ever visited your Nana in the middle of February when she hasn’t opened a window for five months — you’ve probably smelled it: Old People Smell. It’s pretty much a combination of:

(If we forgot anything, let us know in the comments.)

However, researchers at the Monell Chemical Sense Center in Philadelphia recently decided to determine whether Old People Smell is a scientific fact. And what they found was pretty surprising: Old people do have a discernible odor, but it’s not all that terrible. And it’s certainly not as terrible as the odor given off by middle-aged men.

Researchers collected body odor samples — yep, that’s some poor bastard’s job — from participants who were divided into three different age groups: 20 to 30 (young), 45 to 50 (middle-aged), and 75 to 95 (old). Each person slept in a shirt equipped with scent-collecting armpit pads for five nights in a row. After five days, the armpit pads were put into jars, and a group of people in their 20s were asked to determine what funks were funkiest. Not surprisingly, they were consistently able to distinguish an old person’s scent from the others. Surprisingly, they didn’t tend to think old people smelled worst. Middle-aged men received that distinction. (Middle-aged women were thought to smell better than old women).

The study’s authors suggested that part of the reason old-person smell really isn’t all that offensive is because the reptilian part of our brains registers it as being a sign that whoever is giving off the odor has good genes — in other words, they managed to grow old — and is therefore a good person with whom to associate. Still, we’re not sure you could market a cologne that way.