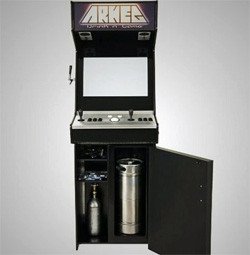 spent plenty of our parents’ money playing arcade games when we were kids — but all those hours of pumping quarters into Street Fighter and Discs of Tron never left us with a hangover. However, the Arkeg ($4,000), an old-school arcade console with a five-gallon keg hiding in its belly, will most certainly change that.

Unlike classic arcade consoles, the Arkeg boasts a 24-inch LCD screen and 2.1 HD surround sound so that even classic games look and sound crisp. A joystick, trackball, and six buttons ensure that you’ll be able to play pretty much any old game you can think of. That’s right — the Arkeg comes with 69 pre-loaded games, including Mortal Kombat I, II, and III; Paperboy, Street Fighter II, Xenophobe, Asteroids, and Defender. But with the ability to run computer games as well as transfer games via Wi-Fi or a direct connection, you have the option to play more like 15,000 different titles.

Our one complaint? There are no cup holders, which seems like a huge oversight considering the keg can distribute more than 55 beers. That just means you have to be extra careful when playing the Paperboy Drinking Game, where you chug a beer every time you hurl a paper through a window, run over a yappy dog, or crash into the guy breakdancing on a suburban sidewalk.

How to Be Ready for Your Personal Injury Lawsuit

How To Select The Best Masonry Paint For Your Exterior Surfaces

Transforming Your Garden for Summer

USA Online Gambling: Is it Legal? What You Need to Know

USA online gambling is on the rise and is projected to become a $92.9 billion industry by...

How to Keep a Long-Distance Relationship Strong and Happy

The 3 Things To Do When Your Car Is Overheating