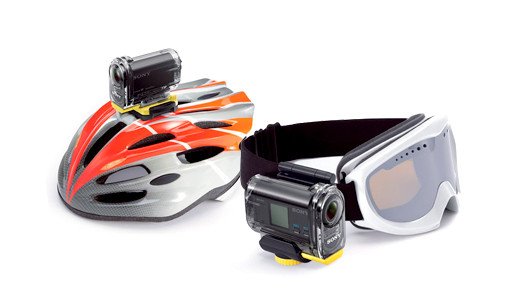 Historically, if you’ve wanted to strap a camera to your helmet, bumper, or handlebars and do something exceedingly dangerous, GoPro cameras have been the go-tos. But this month Sony is releasing its Action Cam ($170-$250 @ Amazon.com), and it’s sure to give GoPro a run for its money when it comes to the way people document themselves being extreme…ly unsafe.

The Action Cam weighs a little more than 3 oz. and features full HD 1080p video captured by a 170-degree Carl Zeiss Tessar fixed-zoom lens, which goes ultra wide-angle or telephoto and facilitates great 16 megapixel still photos. Since users will no doubt be doing some pretty sick sh*t, the Action Cam features image stabilization to reduce shakiness and a slow-mo feature so that your friends can truly relish the comedic value of your accidents later on. Planning on luging down a mountain at night? The camera works well in low-light conditions too.

The camera comes in two versions — one with WiFi and one without. Obviously the WiFi one will run you more. Still, with it you can turn your phone, tablet, or computer into a viewfinder — the camera doesn’t come with one — which is a pretty cool feature. There’s no onboard memory, but the Action Cam supports MicroSD and Memory Stick. It comes complete with a waterproof housing (good to 197 feet, so almost as deep as you free dive) and tripod, and Sony is offering up several different mounts. We’d tell you to break a leg making your own action videos with the Action Cam, but that probably goes without saying.

From Mac Mail to Outlook Without Hassle

Five Sports Bets you should be Backing

It’s that time of year again when all the major sporting events are played out across the...

Features That You Should Ask Your QuickBooks Enterprise Hosting Provider Before...

5 Benefits of Taking Supplements For Muscle Weight And Strength