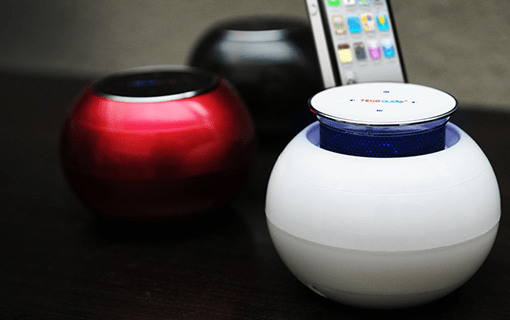 The CERA portable Bluetooth speaker by Tego Audio ($60 @ Amazon.com) succeeds where most other companies who have attempted to create a cool mini-Bluetooth device have come up short (we’re looking at you, Beats Pill!). Namely in that the CERA is easy to use, surprisingly pumps out a big sound, and is versatile enough to fit in at summer barbecues, camping, or when you’re lounging poolside or on the sand.

Compatible with iPhones, iPods, iPads, and most of your other Bluetooth-enabled devices, the CERA allows streaming up to 33 feet away. What’s more, a voice notifications alerts you when the it’s turned on — not that type of turned on, perv — when it’s in pairing mode, and when it’s done pairing. The unit charges over USB and takes up to three hours to go from empty to full juice. Once charged, you’re looking at 5-7 hours of play.

Also: Look Better With Your Shirt Off

The CERA’s design is sleek and comes in white, black or red. Pretty sharp looking, actually, so long as you ignore its resemblance to a Pokéball.

Forgoing the clunky, busy style of its predecessor, the NOVA, the CERA is rounded with nary a decorative flourish except for the directional buttons on its top. In a world dominated by the minimalist style of Apple products, you can choose to get in the game or attempt working against the game. Tego’s in, and it works for me.