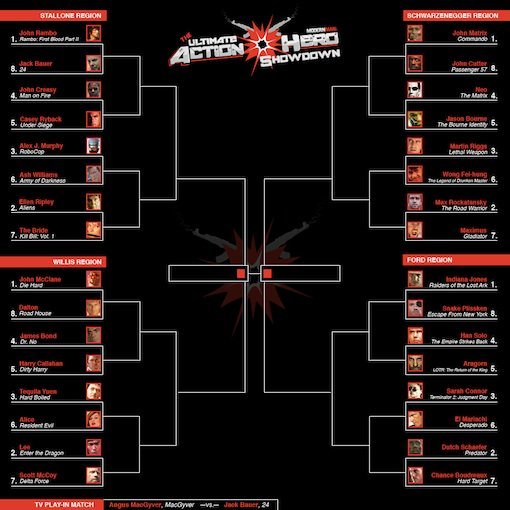 DAY 2: THE FIRST ROUND OF THE SCHWARZENEGGER REAGIONAL
(Click on the bracket for a closer look.) 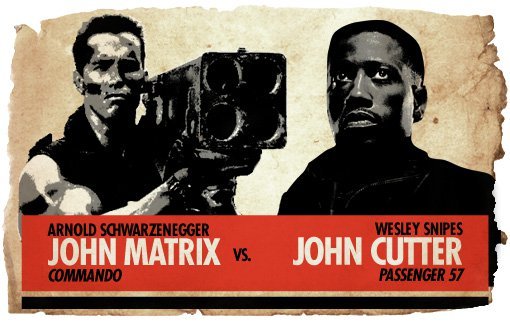 In this showdown, it’s the verbal jabs that draw the most blood. Cutter opens with his signature line, “Always bet on black.” It’s clever and it really makes you think — and, given the bizarre dearth of African-American action heroes, it’s not likely to be co-opted. But what’s this? Matrix counters with the ultimate slow-burn: He tells Cutter that because of his fondess for him, he will kill him last. Then, when they meet up again hours later, Matrix mentions that he eats Green Berets for breakfast — and is very hungry. A confused Cutter, who was never a Green Beret, reminds Matrix about “that whole kill me last thing.” Matrix then informs Cutter that he lied, and kills him … not last! Matrix takes this one in a walk. That’s some epic quippage.
WINNER: JOHN MATRIX 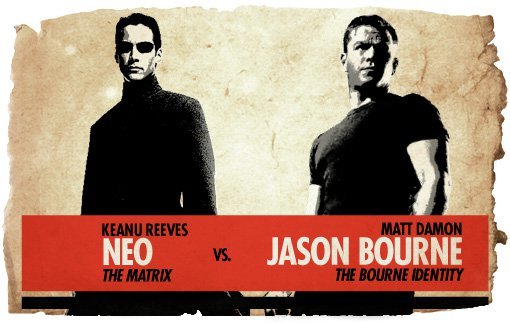 After the match is delayed due to ring announcer confusion (“In this corner, Mr. Anderson! … sorry, I mean Neo! And in this corner, Jason Bourne! … sorry, I mean David Webb! … wait, is it Bourne?”) the gothy cyberpunk and forgetful spy go at it. Bourne relies on the nauseating camera techniques of his second and third movies by continuously shaking the camera in an effort to disorient and confuse Neo. It elicits a “Whoa!” but in the end knowing kung-fu trumps not knowing who the hell you are.
WINNER: NEO 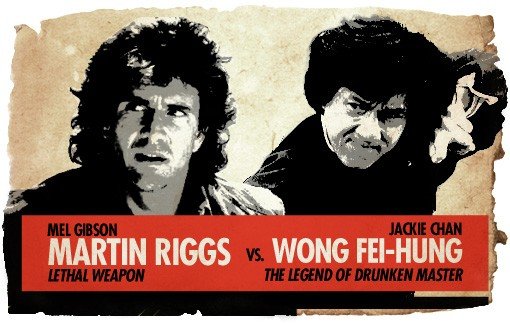 A confident Wong Fei-hung reaches down for his trusty, booze-filled gourd only to find … it’s empty! He looks up just in time for a bleary-eyed Riggs to slur “sugartits” and punch him square in the junk. After an incomprehensible post-fight rant about The Three Stooges, the Jewish mafia, and stigmata, Riggs collapses in a drunken heap. That settles it: The guy is clearly not just trying to draw psycho pension.
WINNER: MARTIN RIGGS 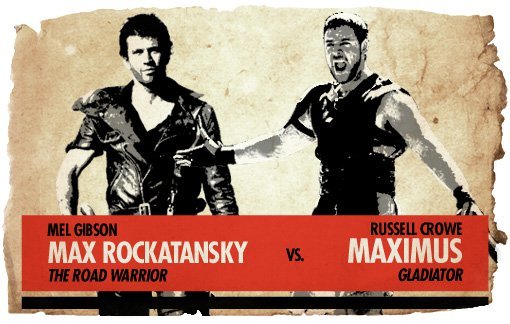 Both Max and Max had their wife and child viciously murdered, thus becoming shells of men consumed only with violence and revenge. Yay for us! As Maximus lumbers into the Ultimate Action-Hero Showdown’s squared octagonal arena circle amid the roar of the crowd, all in attendance wonder which weapon he’ll choose. The sword? The spear? The hotel desk phone? But before the gladiator can even begin to consider unleashing hell, he’s crushed underneath the wheels of a vehicle cobbled together from a semi, black Interceptor, train, dune buggy, and pair of Tina Turner’s gigantic earrings. Are you not entertained?!
WINNER: MAX ROCKATANSKY