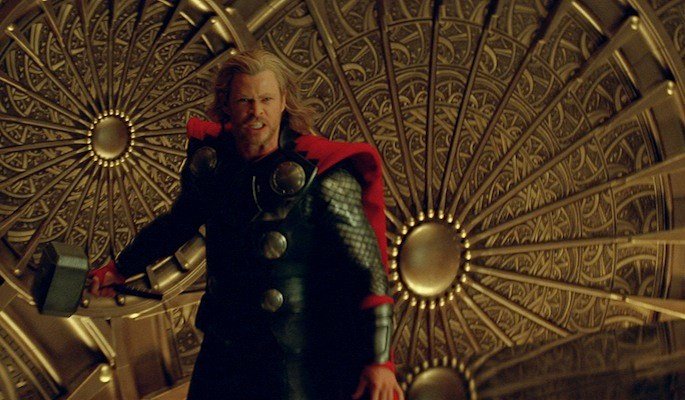 You may or may not recognize Chris Hemsworth from 2009’s Star Trek. He played Captain Kirk’s father, and while that character was cool enough to give his son the middle name Tiberius, he also got his spaceship blown up after like 10 minutes in the movie.

Now that Hemsworth is playing the lead in Thor, it’s his career that’s blowing up. In addition starring in the movie that unofficially opens 2011’s summer blockbuster season, he’ll be reprising the role in The Avengers, star in the horror film The Cabin in the Woods, and appear in the remake of the awesomely bad Red Dawn.

So we asked him about it.

What were the most miserable things you had to do in order to look like Thor?
I didn’t mind so much the working out. But my body doesn’t naturally exist at that weight, so I had to force-feed myself so much chicken breast and rice and steak — all prepared so that they were very boring and plain. Eating was the most exhausting part of the whole film. But then the first couple weeks of filming, I was pouring so much sweat in the costume that weight was just falling off me. So the costume designer came up with this cooling vest, which I think race car drivers wear — a little vest with pipes that cold water runs through to cool you down. 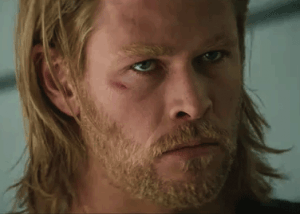 Okay, but can a mere mortal ever get truly jacked enough to play a Norse god?
[laughs] No. But I certainly read enough to get a sense of who Thor was. I read some things on Norse mythology and learned about the fatalistic view they have that everything’s preordained. It’s what lead the Vikings to have a fearless attitude in battle and with their lives in general.

Who were your favorite superheroes growing up?
I think Superman was probably the very first one I was aware of. I would run around the house pretending to be him. I also had a Robin costume, which was a nice pair of green underwear and a yellow shirt and red cape.

What was it like acting in a summer superhero movie directed by a guy [Kenneth Branagh] best known for doing Shakespeare … and Wild Wild West?
I was like forging metal. He would keep working scenes until they became as strong as they could be. One suggestion Kenneth had for me was to just let the costume do it, because I had this huge helmet on my head and could hardly even see. Plus Anthony Hopkins was so good in some scenes that I thought, “That’s amazing … and I’m useless. I may as well drop my hammer and leave.”

Yeah, yeah, yeah, enough about Hopkins. What about Natalie Portman?
Scenes with Natalie were sort of dream time for me. Some of my favorite moments are the sequences between Thor and Jane.