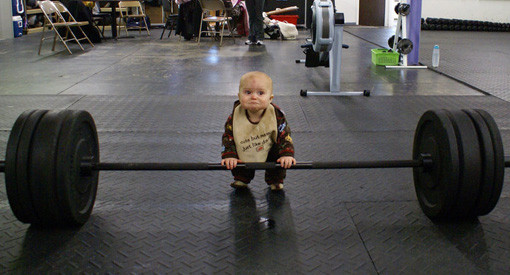 Some of us avoid the gym because we’re lazy sacks of beer and saturated fat, while others avoid it because it’s intimidating. Seeing jacked guys and gals toss us heavy weights, grunting, and wearing nut-huggers that highlight their junk isn’t appealing. Well, too bad. If you want to lose weight, ditch the beer and Funyuns. If you want to gain strength, you have to hit the gym or at least lift weights somewhere. UsingVelocity Based Training (VBT), however, gives you an out when it comes to using lighter weights.

With VBT, instead of focusing on the speed at which you lift the weight, you focus on how quickly you’re lifting it (hence the name, velocity based training). Doing so, via the help of a sensor and app, such as thisisbeast.com, can keep progression steady and reduce injuries. How? Because you won’t be so obsessed with trying to add more weight.

Here’s how it works: You strap a sensor to your wrist or the bar that you’re using to lift and you start doing your thing. From there the tiny robots work tirelessly inside of the sensor to produce data that gets logged on a smart device (phone, tablet, etc.). It will monitor how fast you’re moving tie weight and decide which “working zone” you’re in. Load on too much weight and you’re likely going to fall out of your ideal zone, and therefore be directed to lose some poundage and reload with the goal of getting the bar to move faster.

Velocity based training is an approach that essentially removes ego from the equation — which is great when yours is as fragile as ours. You won’t have to worry about whether you’re lifting enough weight because you’ll be told what that appropriate weigh is depending on your ultimate goal: max strength, power, hypertrophy, and velocity.