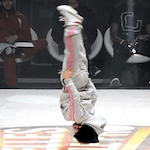 What were you doing when you were 6 years old? Probably picking your nose, torturously trying to spell one-syllable words correctly, and bursting into tears whenever the slightest thing went wrong. (Not much has changed, has it?) Terra (aka “Dora the Destroyer”), the little girl featured in this breaking battle, is different. At the Chelles Battle Pro, she was busy being the coolest person in the room — and the winner of the title of best dancer in the “baby battle.” She completely ruins her opponent here, a boy who’s probably about 10 and is totally amazing himself. (He goes first, and after he’s done, you won’t believe anyone could possibly beat him.) But she seals the deal at 1:30, with a series of moves so cold, Scarface would have backed off. We hope that her crew, the UK-based Soul Mavericks, bought her some ice cream as a reward.