You’d think “Don’t mess with a dude’s Lamborghini” would be a given for anyone who has ever owned a shitbox car before. For these two clowns, it wasn’t. Two Czech pranksters named Erik Meldik and Cenek Styblo evidently got cut off by the dude in the Lamborghini, accordign to the New YorK Post. So instead of giving him the finger, keying his door, or dumping a milkshake onto his fine Italian leather seats, they thought it would be funny to put a fake log on his whip and record his reaction for all of YouTube to LOL at.

Seems like a good concept for a prank … except they forgot to think about a few things: A) guys don’t like people fucking with (or shitting on) their automobiles, bicycles, or skateboards; B) tasers are super easy to come by nowadays.

We debated whether the video was real or not. In the end, we came to one conclusion: who cares. Some idiot got jacked up by a taser and it gave us an excuse to laugh and then look into stun guns and tasers, like these … 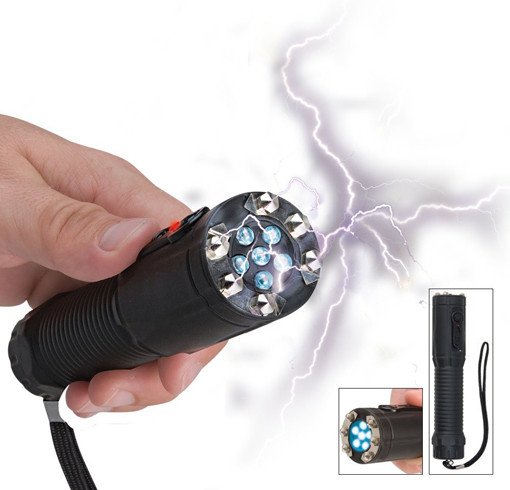 Shocklight Stun Gun ($50 @ Amazon.com)
At fist glance the Shocklight looks like a LED flashlight, but surrounding those six bulbs are tiny shockers that deliver 1 million volts of charge. The handy thing is that the Shocklight is unassuming and doesn’t seem like a weapon since it’s a flashlight. The downside is that putting it to use means that the attacker has closed the distance and already has the ability to strike you. In other words, if you can use this one someone, they already have the ability to be pummeling or stabbing you. This makes the Shocklight good as a last-ditch device.