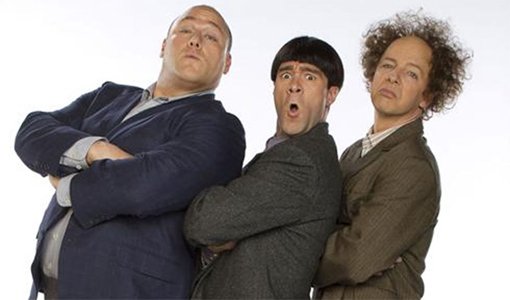 Peter and Bobby Farrelly are responsible for classic comedies like Kingpin, There’s Something About Mary, Dumb and Dumber, and Fever Pitch. And now, after 16 years of trying, the Farrelly brothers are finally releasing a feature-length movie starring everyone’s favorite dimwitted, sociopathic, hyperviolent vagrants. The Three Stooges, which opens in theaters tomorrow, is rated PG — which is particularly unfortunate considering that it co-stars Sofia Vergara and Kate Upton.

The rating is just one reason why we don’t have high hopes for the film. Another is that you can’t really improve upon the originals. So we gathered up some of our favorite Stooges clips featuring the original Moe, Larry, and Curly. (Sorry Shemp.)

THE STOOGES IN COURT
The Bible has never been so funny!

THE STOOGES IN SCRUBS
Hmm, what could they get up to while surrounded by scalpels and saws?

THE STOOGES IN A FOOD FIGHT
Luckily, they were at one of those old-time fancy-dress parties that served nothing but pie.

THE STOOGES IN THE DENTIST’S CHAIR
Actually, this isn’t so different from the way we think of going to the dentist.

THE STOOGES IN A BUNCH OF FIGHTS
Somehow, it never gets old.

THE STOOGES IN … A BUNCH MORE FIGHTS
Seriously. It does not get old.