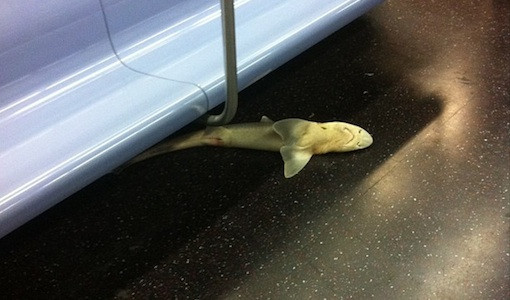 If someone told you he saw a shark on the New York City subway, you might think of the 1961 musical West Side Story, which featured two rival gangs called Sharks and the Jets who danced all over each other’s asses. Or you might think that a “shark” was some sort of slang term for when two inebriated hobos have a knife fight on a crowded subway car during rush hour. What you may not think of is an actual shark.

But that’s what it was. A passenger reportedly noticed the shark in the early afternoon after smelling something God-awful on the car. (Though how people could miss a goddamned shark, even a relatively small one, laying on the floor of the subway makes the whole thing kind of suspicious.) (Notice I did not say “fishy.”) When some busybody ruined everyone’s commute by reporting the shark to the conductor, he made everyone get off the train — in Queens, no less — and then heroically put the shark in a garbage bag and threw it out.