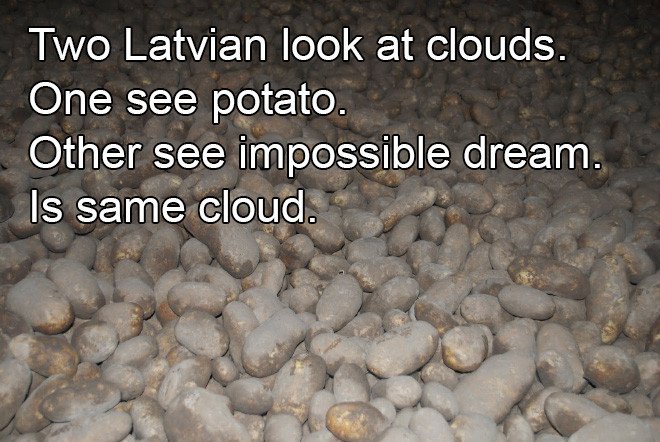 We have no idea how former Modern Man Editor in Chief Ky Henderson and writer Chris Connolly managed to make Latvian jokes a hit, but they did. (You can read more about their Latvian jokes origin story here.) Since they started their Latvian jokes via IM eight years ago it has since spawned into a thing. Here are some of the better jokes, not that we understand them:

1. “One day, Latvian is hearing of knock on door. Latvian is asking, ‘Who is?’ Answering, ‘Is potato man. I come around to give free potato.’ Latvian is very excite and is opening of door. Is no potato man. Is secret police.”

2. “Why six is afraid seven? Because seven have many friend Politburo.”

4. “How many Latvian is taking to screw in light bulb? Only one. Obtaining of light bulb is hard part. You have potato?”

5. “Latvian is hungry. He steal bread to feed family. Get home, family is dead. ‘More bread for me,’ Latvian think. But bread have worm. Such is life.”