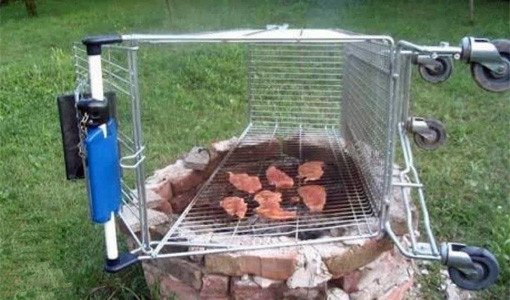 Grilling looks easy when someone who knows what they’re doing is holding the tongs. However, when you’re the guy wearing the “Kiss me, I’m the chef!” apron — we hope you don’t really wear one of those — grilling suddenly becomes awfully easy to screw up. That’s because there’s more to a BBQ than starting a fire and tossing meat and veggies onto a grate. The right tweaks can turn your grub from good to great … but the wrong ones can turn it from great to “What the hell did you do to this poor cow?”

To avoid the latter, we asked three expert grillers for the most common mistakes they see people make on the grill. Chances are, no matter how many times you’ve had a BBQ, you make at least a few.

Cranking the heat up to speed the grilling process also increases the odds you’ll ruin whatever it is you’re cooking. “You can’t be in a hurry,” says Chef Paul Kirk, co-author of America’s Best BBQ. “You need the patience to let what you’re cooking cook.”

“Allow whatever you’re going to grill to reach room temperature before placing it on a grill,” says A. Cort Sinnes, author of The New Gas Grill Gourmet. If you’re cooking steak, for instance, take it out of the fridge at least an hour before you grill it.

Grilling fatty foods like burgers, chicken, pork, and beef steaks over an open flame will let the outside become charred while cooking the inside to whatever doneness you prefer (you should not prefer anything more than medium).

#5) You Do Grill Veggies Directly Over Flames

Vegetables like asparagus, onions, mushrooms, and peppers should be cooked near, but not on top of, an open flame to give them a smoky flavor. Just remember to yank them off while their color is still vivid.

USA Online Gambling: Is it Legal? What You Need to Know

USA online gambling is on the rise and is projected to become a $92.9 billion industry by...

How to Keep a Long-Distance Relationship Strong and Happy

The 3 Things To Do When Your Car Is Overheating