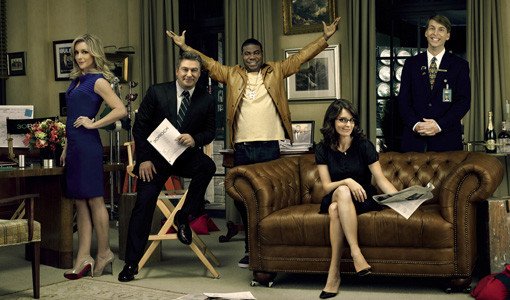 During the course of its seven-season run, Tina Fey’s 30 Rock has been one of the funniest shows on television. Despite winning Emmys, Golden Globes, and fistfuls of other tiny statues, 30 Rock never found a truly mass audience. But we were loyal fans. And we’ll buy the box set. And the Blu-ray box set. And the special commemorative DVD and Blu-ray box sets with additional episode commentary from the cast and crew, because that’s how much we loved this show.

As the final episode airs, we thought we’d take a look back at 30 of the life lessons Liz Lemon, Jack Donaghy, Tracy Jordan, and the other 30 Rock cast members taught us about life …

1. Relationships are like sharks: If you’re not left with several bite marks after intercourse, then something’s wrong.

7. Always take your darkest secrets to the grave.

8. Remember, everyone, just don’t be yourselves.

9. Anyone still trying to make the “Women aren’t funny” argument is an idiot — and probably not funny.

11. If you date a writer, expect the good, bad, and ugly aspects of your relationship to eventually (and publicly) be shared with others.

12. The hot assistant at work isn’t into you.

13. Everyone is selling something.

15. Even the best jobs still have shitty parts.

16. If we lived in North Korea, we’d watch the weather every day.

17. Female jealousy is an evolutionary fact. If you try to breed it out of them, you wind up with a lesbian with hip dysplasia.

18. It doesn’t matter how long you’ve lived in New York. It’s still fun to look up and pretend all the buildings are giant severed robot penises.

21. Sleeping on planes is dangerous due to the risk of being Incepted.

23. When you have a problem, you talk it over with your priest, or your tailor, or the mute elevator porter at your men’s club, and you take that problem and crush it with your mind vice. But for lesser beings like curly-haired men and people who need glasses, therapy can help.

24. Wearing tan slacks with a tan turtleneck makes you look like a giant condom.

25. Jerry Seinfeld really does sound like he’s about to cry all the time.

27. There’s a reason God gave us two ears and only one mouth: Listening is twice as important as talking. But he gave us 10 fingers … he must really want us to poke things.