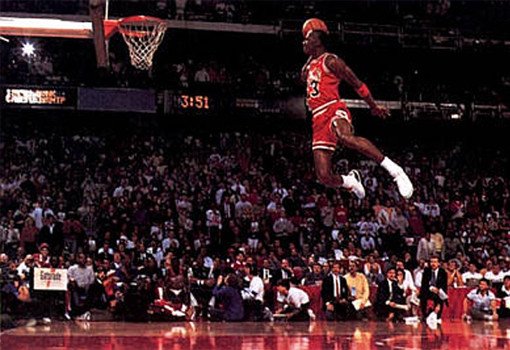 #5 THE SLAM DUNK CONTEST
The slam dunk contest was started by the ABA in 1976, and later picked up by the NBA in 1984 when the two leagues merged. When Dr. J took off from the foul line and threw down a one-handed jam during that first showdown, people were astounded by the display of athletic prowess. When Jordan did it in ’88 to defeat Dominique Wilkins, it was even more iconic than Dr. J’s slam. Now, decades later, Dwight Howard and Serge Ibaka are performing pretty much the same thing. The contest got so stale at one point that they actually stopped doing it for a couple years in the late 90s before reviving it in the new millennium.

#6 ALL-STAR WEEKEND
It’s billed as the best in the league playing with and against one another … but what’s not advertised is that nobody plays D, sets screens, or gives a sh*t about the outcome. Add that to the skills challenge, celebrity game, three-point contest, and aforementioned slum dunk contezzzt. Why is this popular?

#7 FANS WEARING THE SAME T-SHIRTS DURING PLAYOFF GAMES
It was kind of cool the first time a rowdy crew of fans used the gimmick to support their team, but now it’s time to move on. Wearing the same shirt as everyone else takes a few bucks and no effort. If you really want to show how much you love your team, shave your entire body and tattoo the uniform on your skin. That’s dedication.