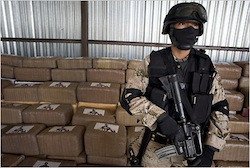 MEXICO
Population: 115 million
Has Nukes: No
Problem: Its shocking narco violence, some of which takes place along the U.S. border — and now even in the U.S. itself

Rocked by gruesome narco violence that has claimed some 50,000 lives, Mexico has seen its longterm drug war hit even its quietest, most tourist-friendly regions. Limited success cleaning up corrupt police forces has been offset by a brain drain in metropolitan locales. Recent successes by the government, such as the killing of Zeta gang leader Heriberto Lazcano Lazcano have been marred by embarrassments —the kingpin’s body was stolen from a funeral home by armed men. Oddly enough, the Mexican drug war wasn’t mentioned in the debates, but the failure of the FBI’s failed “Fast and Furious” sting operation has been a thorn in the side of the Obama administration for months. But if the violence continues to move north into the U.S., that may be the least of the president’s problems when it comes to Mexico.

Obama says: “I think that President Calderon has done an outstanding and heroic job in dealing with what is a big problem right now along the borders with the drug cartels.” 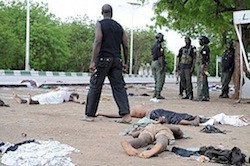 NIGERIA
Population: 170 million
Has Nukes: No
Problem: Lots of oil, lots of unrest, and lots of violent fundamentalists

Nigeria is a massive oil producer — it has the 11th largest reserve of oil in the world. And yet because of endemic corruption, inefficiency, and violence, the country suffers from huge inequality and dramatic poverty. Not surprisingly, when you see Nigeria’s name in the headlines, the story is usually about domestic unrest. Which makes the fact that the populous African nation announced last year its plans to build nuclear power plants especially noteworthy. Meanwhile, it’s dealing with violent Islamic fundamentalist group Boko Haram as well as the rebel Movement for the Emancipation of the Niger Delta (MEND), which steals huge amounts of oil. The good news? The 2011 elections were praised for relative fairness. Still, a Finance Minister who wants to reign in corruption has her work cut for her.

Obama says: “Some key outcomes … so far have been successful integration of civil society into the electoral process prior to the 2011 elections, sustained and elevated dialogue with energy-sector officials on energy policy, reforms to increase investment, and agreement to support the development of a civil-affairs training center in the coming year.” 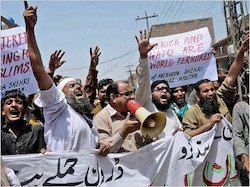 As a nuclear-capable country that almost certainly supports terrorists, Pakistan is basically our worst nightmare … even though it’s also technically an ally. Relations are tense, to put it mildly. Recent protests against American drone strikes — and a lingering anger that the U.S. took out bin Laden on Pakistani soil without asking for permission — make it clear that many Pakistanis resent the American presence, which makes it tough for the leaders who do want to work with us to do so. Cricketeer-turned-politician Imran Khan gets endless press for demanding that the U.S. end drone attacks. (Stick to wickets, okay pal?) However, the recent attempted murder by the Taliban of a teenage girl who spoke out about wanting an education has sparked new debate within the country about … well, about what total assholes those guys are.

Obama says: (On drone attacks) “This is a targeted focused effort at people who are on a list of active terrorists, who are trying to go in and harm Americans, hit American facilities, American bases, and so on. For us to be able to get them in another way would involve probably a lot more intrusive military action than the ones we’re already engaging in.” 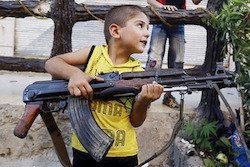 SYRIA
Population: 23 million
Has Nukes: No
Problem: A bloody civil war is threatening to draw NATO member Turkey into the fray

More than 30,000 people have died since fighting in Syria began a year and a half ago. The Obama administration has been (sometimes secretly) supportive of the rebels fighting Syrian President Bashar al-Assad and his government goons, but currently there appears to be no end in sight to the fighting. The deaths of thousands of people — including many civilians — is awful, but especiallyworrying to the U.S. is the fact that the conflict has recently spilled over into neighboring Turkey. Why is that so bad? Because Turkey is a key U.S. ally in the region and a member of NATO. And as such, an attack on Turkey amounts to an attack on all the other members of NATO. Including the United States.

Obama says: “We have been very clear to the Assad regime, but also to other players on the ground, that a red line for us is we start seeing a whole bunch of chemical weapons moving around or being utilized. That would change my calculus.”

Ultimate Destinations for a Guys’ Getaway