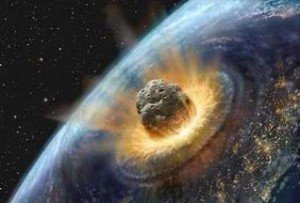 WE GET PUMMELED BY AN ASTEROID
In June an asteroid the size of a school bus missed our planet by a mere 7,000 miles. Last February one came as close as 3,400 miles, and was detected by NASA only 14 hours before it rocketed by. So what to do about flying space rocks of fiery annihilation?

There’s the Armageddon method of using a bomb to blow the asteroid to pieces (that would probably still hit the earth). Or launching a spacecraft carrying reflective mirrors that use the sun’s hot gasses to vaporize the asteroid’s surfac, thus creating thrust to divert its path. Or strapping a gravity tractor to a space ship to try to move the asteroid’s route. Thing is, there’s almost no way we could actually accomplish any of them.