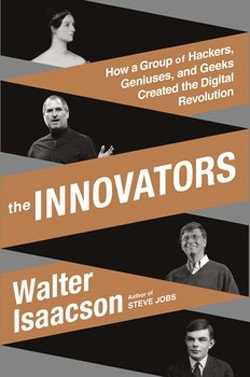 It’s a lot of words and sentences strung together that discuss the the creation and eventual explosion of the internet. And it’s way more interesting than how we described it in that last sentence. And Isaacson doesn’t use emoticons or web text at all — he uses actual words and phrases — just like in the old days! Instead of covering all the stuff you already know, he begins at the 19th century and person by person, bit by bit, constructs how the digital revolution came to be.

Of course, if you’re broke and don’t want to buy it you can always get it for free from the library, or, we’re guessing, get the Kindle version for free from BitTorrent. If you did that, Steve Jobs would be proud … maybe. But probably not, you lousy pirate!