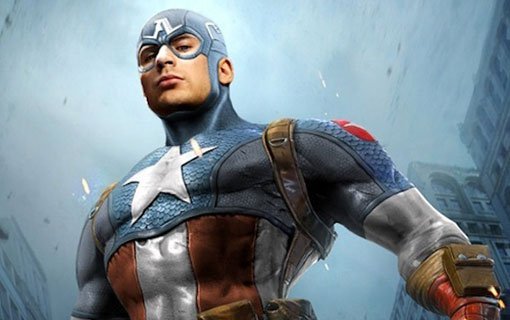 Chris Evans is no stranger to superpowers. He played Johnny “The Human Torch” Storm in two Fantastic Four movies and … well, he and Jessica Alba’s skintight costume were great. Now, however, he’s hefting the most patriotic shield ever in Captain America: The First Avenger.

And luckily, the Statue of Liberty will not have to shed any bald eagle-killing socialist tears — the movie mostly lives up to its awesome main character. Evans does an especially great job as Steve Rogers / Captain America, but as we found out, he was so torn up about whether or not he should accept the role that he went to therapy to try and figure it out.

Did playing Captain America make you feel more patriotic in real life?
There really is something about him that made me want to be him. I’d go home and say, “I should try and be better. It feels nice to be good.” I couldn’t help bringing some of him home with me.

And by that you mean, you kept the shield so you can, like, sling it on your arm while you’re watching TV. Right?
No, I didn’t get to keep anything — they kept it all. It’s unfortunate. I wanted to.

We heard you actually almost turned down the role of Captain America. What gives?
I was nervous — in fact, I said “No” the first few times I was asked. It meant a commitment to doing six movies, which could last 10 years. So if, all of a sudden, I didn’t want to do them anymore — which is something that I think about every now and then — I couldn’t walk away. I love making movies, but I’m not dead set on being a gigantic movie star.

We understand … well, sorta. What’s wrong with being a gigantic movie star?
A big thing that I enjoy in my life is anonymity. I’ve managed to work for 10 years and kind of stay under the radar. I make a decent living, but I can go to a ball game. The thought of losing that anonymity was terrifying. When I’m recognized, I get very uncomfortable, my face gets red, I sweat. For some reason, in public situations, on red carpets, at talk shows, I just crumble.

So what changed?
The more I spoke to my friends and family about it, the more I realized I was making a decision based on fear. I knew I’d regret that more than anything else. So, I finally agreed to do it, but I wanted to fix my brain. So I went to therapy. It’s not like there were giant breakthroughs, like in Good Will Hunting. It’s just nice talking. It’s amazing how many things you take on and keep to yourself.

You also had to prepare physically. What was the training like?
Sh!tty! We did about four months’ worth. I was filming in Boston at the time, and they sent a trainer from London to work with me. I’d never had a trainer before, and we would go about two hours every day. It was horrible. 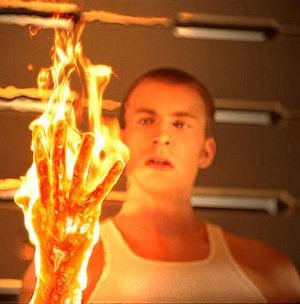 Captain America vs. The Human Torch: Who wins in a fight?
Man, I don’t know. I can’t say, I have allegiance to both of them.

Fine. At least tell us which one chicks dig more.
It depends. Some girls like the bad boy, some girls want a good man.

Give us a bunch of spoilers about The Avengers … or at least describe the set.
It’s cool! In Captain America, I was the only one in a superhero outfit. But The Avengers is different. The first day I came on set, the two people that really did it for me were Thor and Iron Man. I love the Iron Man movies, so seeing the suit in real life was cool.

Few people can hoist Thor’s hammer, but Captain America is one of them. Did Chris Hemsworth let you hold it?
I won’t touch his hammer. Hemsworth is a scary dude!