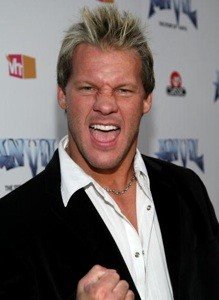 Breathe easy, folks: Chris Jericho isn’t injured. Many people who watched him get punted in the head on a September episode of WWE Raw may have thought so, but it was only part of a storyline.

In fact, Jericho has been busier than ever. His time away from the ring allowed him to complete his second book, Undisputed: How to Become the World Champion in 1,372 Easy Steps, plan a new record with his heavy-metal band, Fozzy, and to be considered for Dancing with the Stars.

Despite the busy schedule, Jericho carved out some time to chat with us about how his former boss, Vince McMahon, used to chew him out, his arrest for drunk driving, and why the he wears a scarf.

Did you write Undisputed, or did you have someone ghostwrite it for you?
Both of my books were 100 percent written by Chris Jericho. I had a collaborator, a sounding board to bounce ideas off of, but I couldn’t let someone else write my story.

You discuss your relationship with Chris Beniot [who murdered his wife and son before killing himself in 2007] and your bust for drunk driving. Did you ever worry you were being too candid?
Writing about things like Benoit was very therapeutic for me. Nobody has made the right decision every time in their life, so you have to take your experiences and spin them into becoming a better person. When I was sitting in jail for drunk driving and it was the worst night of my life, deep down I was thinking, This is going to make a great story in the next book someday. I mean, thank god nobody got hurt, but if I weren’t caught maybe I would have killed someone or myself another time. But at least I got something [positive] out of it.

You write about how [WWE CEO] Vince McMahon used to rip into you pretty bad. How much did that suck?
Vince was all about life lessons, but at first I had no idea what he was talking about. I wasn’t smart enough to know that there were things I didn’t know, like how the game of wrestling worked, or how the politics were played. As time passed, I began to understand what he meant, and he taught me how to be a professional and how to be a better person.

What exactly would he chew you out for?
Some of it was my own fault. I’d bring stuff up about how I thought things were done, how I used to do things, and nobody cared. The way I did things before meant nothing. I needed to adapt to the way things were being done.

You’re married with kids, but your jobs put you on the road, sometimes for weeks at a time. How do you handle that?
I met my wife when I was in the [wrestling] business, and my kids have always known that their dad is gone a few days per week, so it’s what we’ve come to know. It puts strains on us, sure, but it’s a good mix when you’re not around each other every single minute of every single day. I was home most of December and January and my wife was like, “Okay, time to get a job and get back on the road.”

You have rocked a scarf during promotional appearences. Care to elaborate?
Man, everyone is asking about the scarf! I just like how it looks! My fashion is an extension of who I am and what I’m feeling. I went through the suit phase, and now I’m in the scarf phase. What people think about how I dress doesn’t matter to me. If someone tells me that my scarf looks gay I just respond, “Well, I’m wearing it, therefore it’s cool.” If you are cool, it is cool.

Same goes for your hair? At one time it was down past your chest, and then one day it was super short.
Rock stars don’t even have long hair anymore. James Hetfield [of Metallica] and Bruce Dickinson [of Iron Maiden] have short hair now; it seems like the only people with long hair these days are wrestlers — usually the older ones. So I woke up one day and was like, I’m cutting it. I just wanted an easy haircut to manage, and I think I look more like a rock star now than I did with the long hair.