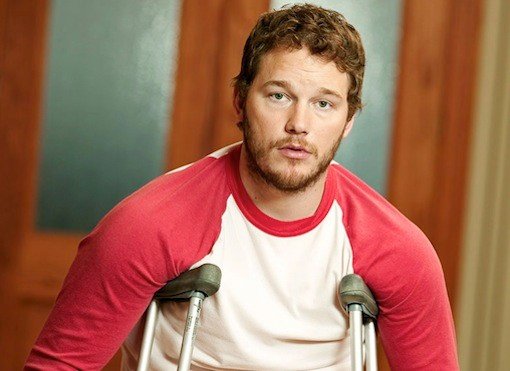 In addition to playing goofball Andy Dwyer on NBC’s Parks & Recreation, Chris Pratt also costarred in Moneyball, which also stars Brad Pitt, Jonah Hill, and Philip Seymour Hoffman; What’s Your Number — as in, the number of people with whom you’ve had sex — which stars Pratt’s wife, Anna Faris. She is hot and funny, in case you’re not familiar. Pratt’s latest blockbuster is Guardians of the Galaxy.

We caught up with Pratt to discuss how many women he slept with before getting married, what it’s like watching his wife film a sex scene with someone else, and how he got in shape to play a professional baseball player in Moneyball.

In addition to starring in What’s Your Number, your wife also produced it. Did you need to audition for her?
I thought I would get away with not auditioning, but I had to. We try to treat anything in our professional lives as if we don’t really know each other; that way there are no questions or weirdness. I originally auditioned for Chris Evans’ role, so I went and read with her. But then at the end they were like, “Hey we want you to play someone else.”

Did Anna turn it into a casting couch situation?
Yeah, I told her I was willing to do sexual favors to get the part and that’s ultimately how it happened. She wasn’t going to give me a role at all, and I said, “All right honey, tell me what I need to do. I’ll do anything.” But instead of sexual favors she had me do, like, gardening and stuff around the house.
NEXT: PRATT TALKS MARRIAGE