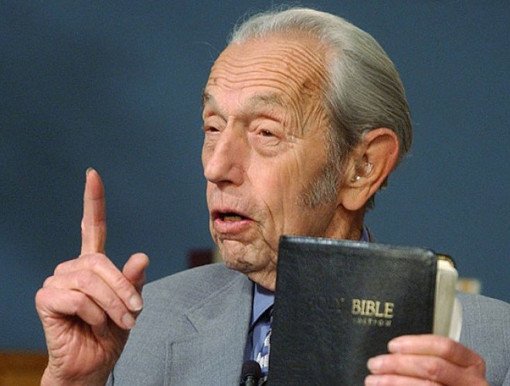 You remember Harold Camping? He’s the crazy old evangelical coot who kept riling people up claiming The Rapture was coming. Well, he died; he was 92.

Camping’s end-times prophecies began in September 1994. Problem was, the world didn’t end. So he revised the date to March 31, 1995. And … nada. There was a 16-year lull in his predictions, but his idiocy would still be heard loud and clear on Family Radio.

Also:  Camping & Other Fools Who Falsely Predicted The World’s End

Then on May 21, 2011 he was, like, double sure. No, triple sure! He even convinced some fools to give up all of their wordily possessions to become better candidates of  being saved when the Good Lord arrived in his limo to pick up the chosen people. Come May 21 and … nada.

According to Family Radio marketing manager Nina Romero, Camping had been hospitalized after falling late last month; she said he died at his home on Sunday. He is survived by his wife of 71 years and millions of people who are still on the rotating planet he claimed would explode, or dissolve, or implode, or otherwise vanish. Anyway, RIP.