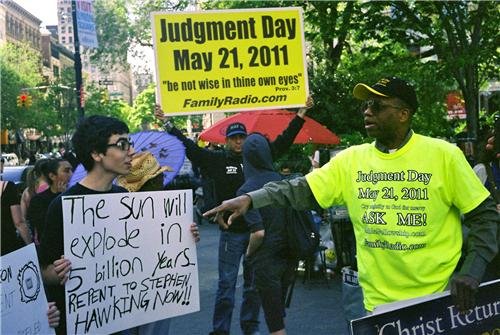 As you’ve probably heard, the world will start coming to an end on May 21. At least, that’s what Family Radio evangelist Harold Camping claims. Camping has convinced thousands of his followers that’s when those who don’t carry signs warning of Christ’s return or wear neon-yellow shirts will literally meet their maker. One dude in New York poured $140,000 — his life savings — into ads for Camping’s campaign, while a pregnant 27-year-old and her husband budgeted in such a way that they’d have nothing left come May 22.

We’re gonna go out on a limb here and say those people have been duped and that Camping is full of holy sh*t. (Fun fact: He also predicted the world was about to end in 1994.) But he’s just the latest in a long line of fellas who’ve predicted the end of of the world … 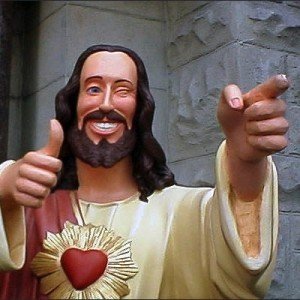 Jesus | 1st Century C.E.
Certain passages in the New Testament suggest that Jesus foresaw the end of the world early in the 1st century. In Matthew 16:28, Jesus is quoted as saying “… there shall be some standing here, which shall not taste of death, till they see the Son of Man coming in his kingdom.” And again in Matthew 24:34 he says, “… this generation shall not pass, till all these things be fulfilled.” That may not sound like much to you, but in Biblical times, that was some tough talk aimed at warning believers that the end was nigh.

The Prophet Hen of Leeds | 1806
When a local hen in the English village of Leeds began laying eggs with the words “Christ is Coming” on them, the town went into a panic, expecting the world to end any minute. Only it didn’t cuz a local prankster had been writing the words on the eggs in corrosive ink, then reinserting them back into the hen. Gross.

William Miller | 1843
After serving in the War of 1812 and watching both his father and sister die, the New England farmer became quite concerned with the afterlife and began studying the Bible closely. Miller was eventually able to convince thousands of people that the Bible had shown him that the world would end on April 23, 1843. His followers frantically gave away all of their earthly possessions in preparation for the big day. Which came and went. He may have been totally wrong on the whole end-of-times dealio, but his teachings are considered the basis for Jehovah’s Witnesses and Seventh-Day Adventists.

Joseph Smith | 1891
Joseph Smith founded Mormonism in the 1830s when he started chatting with God. After learning of the Lord’s plan in 1835 he decided to take a stab at guessing when the world would end. Smith concluded that the “end time” would come sometime before 1891 — which gave him a 56-year margin for error. What a bold prediction! But still wrong.

Albert Porta | 1919
Porta, a well-respected meteorologist, theorized that on December 17 of that year, six planets would align, creating a magnetic field that would cause the sun to explode, engulfing the Earth in fire and flame, killing everyone. When that didn’t happen, dudes continued about their daily lives growing old-timey mustaches and riding bicycles with preposterously large front wheels.

Pat Robertson | 1982
Evangelist Pat Robertson may claim to be a man of God, but he ignored this line in the Bible about doomsday: “No one knows about that day or hour, not even the angels in heaven.” In 1976, Robertson predicted that the world would end in October or November of 1982. He then repeated the ballsy claim in 1980. Today, Robertson continues to write books and appear on TV. Oh, and he’s also still a mean, crazy old man.

Heaven’s Gate | 1997
When the Hale-Bopp comet appeared in 1997, nutsos started spreading rumors that an alien spacecraft full of aliens bent on destroying Earth was trailing it. The rumors picked up steam once they were broadcast on a popular paranormal radio show called ‘‘Coast to Coast.” Upon hearing the news, the levelheaded members of the San Diego-based UFO religious cult known as Heaven’s Gate took it to heart. Thirty-nine of them rented a $7,000-per-week mansion, moved in, and committed ritual suicide over the course of three days while wearing identical Nike sneakers and arm bands that read “Heaven’s Gate Away Team.” Actually, in a way, these wackadoos were right — the world did end. For them.

Nostradamus | 1999
The 16th century French pharmacist allegedly predicted The French Revolution, Hitler’s rise to power, and the JFK assassination — but he totally bombed with his End of Days guess. Some people took his declaration that “The year 1999, seventh month / From the sky will come great king of terror” meant we’d never live to see the ridiculous Y2K frenzy. Boy, were they wrong! Nostradamus also predicted Genghis Khan would show up in 1999 to lend a hand with the bloodbath. What a dope! Everyone knows Khan reappeared in 1989 when he joined Bill and Ted on a most-excellent adventure.