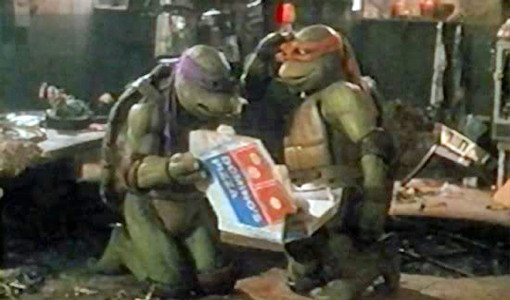 #6: Pizza
After the company’s mea culpa about the sad state of their pizza in 2010 — they ran a commercial where people said their food tasted like cardboard — Domino’s retooled their recipe that included a cheese slice that was a little healthier than what competitors Papa Johns or Pizza Hut had to offer. While Papa John’s had 10 fewer overall calories, a Domino’s slice had less fat and carbs than both brands.

#7: Booze
Ditch the sugary cocktail mixers like orange and cranberry juice for booze that’s neat or on the rocks. (Vodka and whiskey are good choices, since both contain about 73 calories per serving.) If you insist on a mixed drink, Sumner suggests a Moscow Mule. Despite having a stupid name and roughly the same amount of calories than a beer, it also has health benefits. “Ginger is a potent anti-inflammatory, and you’ll get vitamin C from the lime.”

#8: Soda
Aspartame (NutraSweet and Equal) is an artificial sweetener that was approved by the FDA in the 1970s. Despite many medical professionals and activists who for decades have claimed that aspartame is dangerous and plays a role in cancer development in humans, the FDA isn’t sweet on the idea of pulling it off the shelves. There’s that, and there’s non-diet soda varieties that use high-fructose corn syrup (HFCS), which can cause weight gain, dental cavities, and increase heart-attack risks when too much is consumed. Your best option: Sodas that don’t use synthetic sweeteners. Zevia, 365 Cola, and Virgil instead use natural sugar cane, stevia, and herbs and spices, respectively, to enhance taste.