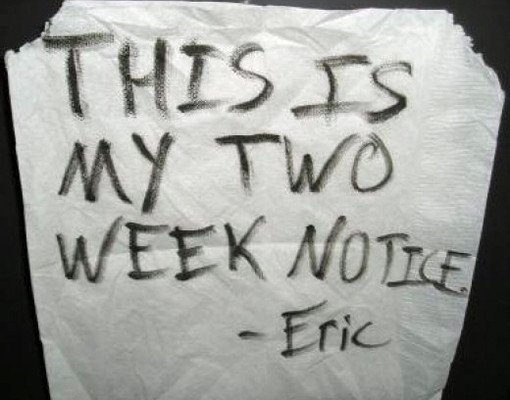 You may have the urge to carpet bomb your soon-to-be-former boss with one-finger salutes and F-bombs when you quit your job. And while it would no doubt make for a hilarious story, you never know when you might need to re-cross the bridges that an outburst like that would burn. Which is why you’ll want to put as much effort into your last impression as you did your first impression — and that includes knowing how to write a letter of resignation.

Before you grab a crayon and cocktail napkin, keep in mind that you first must tell the boss in person that you’re leaving. Only then should you follow up with a resignation letter reaffirming what the two of you just discussed. Above all, the most important thing about learning how to write a resignation letter is to be brief — it needn’t be more than a paragraph. And make sure to give a copy to both your boss and HR. Here’s what you need to include:

The Date Of Your Last Day
Giving two weeks notice is pretty standard. Any less than that and you risk screwing over the coworkers you’re leaving behind, who’ll have to do all of your work. Not only is it a dick move, but it’ll burn those bridges.

The Reason Why You’re Leaving
Your letter of resignation should be filled with restrained honesty. For example, mentioning that you’re leaving for more money, to gain a new skill set, or because it’s a job with more responsibility is all fair game. Complaining about your lousy paycheck or idiot coworkers, however, is probably not a good idea.

Say Thank You
End your letter of resignation by thanking your manager for any personal help or attention he or she has given you. If you actually like the person, throw in a line citing a specific example about how he or she helped you grow professionally. Wish them continued success in their field and give props to your coworkers and their achievements.