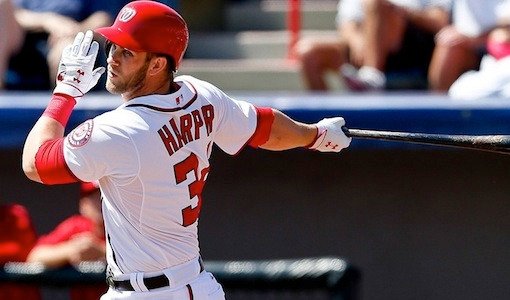 Washington, D.C. has had a professional baseball team, off and on, for more than 100 years. They’ve almost always been officially or unofficially known as the Nationals (they were officially the Senators for much of that time), and they’ve almost always been terrible. They won just one World Series, in 1924. The losing ways continued when the unlucky Montreal Expos were moved to Washington in 2005 to become the latest iteration of the Nationals. How hapless were they? During one game, players wore jerseys that misspelled the team’s name (Natinals).

That’s (mostly) changed, however. Thanks to Stephen Strasburg, Bryce Harper, and several other awesome young players, the Nats are now in the conversation about who could potentially win the World Series this year. And few people know more about the Nats than Elliott Smith, who wrote the new book Beltway Boys, all about the team’s rise. We asked Elliott — a regular ModernMan contributor — a few questions about Strasburg and Harper, and about whether manager Davey Johnson has any good stories about managing the drug-addled Mets teams of the 1980s.

You reported and wrote this book in only three months. Did your wife threaten to leave you at any point?
I’d never written a book before, so I had no idea how damn hard it would be. I had a flashback to college because I pulled a lot of all nighters. I also drank a lot of 5-Hour Energy, which I don’t recommend doing — that stuff is nasty.

How much access did you get to the Nats players?
Not that much. I naively figured the Nats’ PR staff would be thrilled to have someone writing a book about them given that no one had ever bothered to do much of anything on the team, but they declined my request for extensive access. So I had to rely on doing quick interviews while I was working during other games and doing a lot of research with prior interviews.

Any surprises while you were researching the book?
I really enjoyed talking with Strasburg’s high school coach, who told me that as a junior, Strasburg was winless. The coach rejiggered the rotation so Strasburg would have a chance to pitch against one of the worst teams in the state to ensure that he would get at least one win that season. It’s hard to imagine that a one-win high school pitcher is one of the best pitchers in the game right now.

Which Nat is going to go on to have the most impressive career?
Hard to say. Both Strasburg and Harper are truly one-of-a-kind players, but you just never know with pitchers. I think if Harper remains dedicated (and there’s no reason to think he won’t) and stops running full-bore into walls, he could put up Hall-of-Fame numbers. 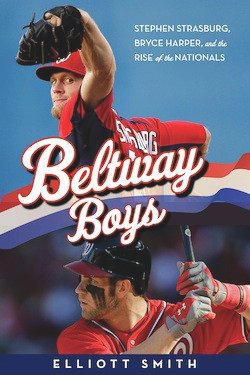 Historically, how good is the Nats’ current pitching rotation? Is it up there with the best rotations ever?
I don’t think we can say until the end of the season. So far, Strasburg is off to a slow start, while Jordan Zimmermann is really the one pitching like an ace. Dan Haren struggled in the No. 5 slot, but he’s started to come on as of late. Let’s just say that Mr. Haren might be the No. 2 starter on the Milwaukee Brewers [No need to single out the Brewers. —Ed.], and he’s No. 5 in D.C.

Strasburg and Harper get tons of press, but who’s a relatively unsung hero on the team?
Shortstop Ian Desmond is one of the emerging young talents in the game – he’s got a rocket arm, can hit a ton and is just starting to truly realize his potential. And I don’t think you can discount how important the signing of Jayson Werth was to the franchise as a whole – it signified the Nats were serious about winning and he helped change the clubhouse culture. Plus, he’s got an awesome beard.

Speaking of, what’s goofier: Stephen Strasburg’s chin whiskers, or Bryce Harper’s full-face eye black?
Gotta go with the eye-black. Harper looked like a leftover from Last of the Mohicans when he wore that in college. The Nats told him to tone it down once he made the majors, but he did break it out for the playoffs last year.

Do you think Strasburg knows who Walter Johnson is?
Only in the context that someone likely presented a stat to him in which he and the Big Train were connected.

Does the team have even more talent in its farm system, waiting to hit the bigs?
Yes, there are several players that will be making an impact in the near future, even after dealing some prospects to shore up the big league squad. Anthony Rendon is a hitting machine that slipped in the draft a bit due to an injury he suffered in college, but he should be a legit pro. He got a cup of coffee this year when Ryan Zimmerman was hurt, and I wouldn’t be surprised if he’s back on the squad before the season is over.

Did Davey Johnson tell you any crazy stories about the 1980s Mets teams he managed?
It doesn’t take much to get Davey going about anything and everything. He’s one of the funnier managers I’ve ever dealt with. Back in the Mets days he was just as wild as some of those guys. Now, he’s mellowed, but the players still love him.

Prediction time: Are the Nats going to win it all this year?
No. They’ve still got to learn to win in the playoffs first. I like them to get to the playoffs again, and fall short somewhere along the way.