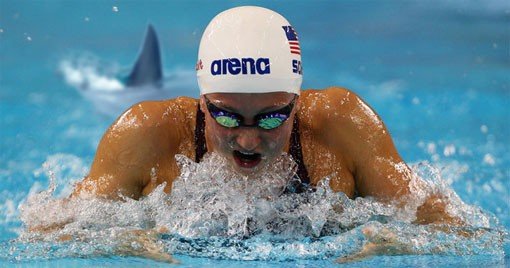 Swimming fast is no easy feat, as those of us who spend Shark Week marveling at the breaststroke of the Great White shark know all to well. And while it’s too late for us to help Quint, Samuel L. Jackson, Nemo’s second cousin, and the countless other poor bastards who’ve been devoured by sharks, we’ll be damned if we let you suffer the same fate.

That’s why we asked 2008 Olympic gold medalist Rebecca Soni for some record-breaking tips, or at least some advice on how not to sink like a brick. Soni, who won her gold in the 200-meter breaststroke, got as fast as she is by training her ass off since she became a competitive swimmer at 10 years old. Follow her tips and our lead and we can teach you how to swim faster than a shark … or at least how to shave a few seconds off of your morning laps. 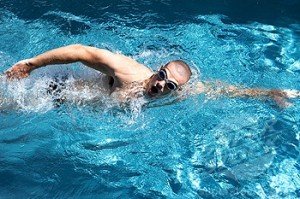 CHANGE YOUR PACE
“Do half of the lap fast, and then take it easy on the second half of the lap,” Soni says. “Or you can mix it up and do five meters fast and 20 meters at a slower pace. Or even reverse that.” Mixing things up will help build explosiveness, and she also recommends keeping your core tight so you don’t flail around like an epileptic in a bathtub. This drill can be used with any stroke.

How To Do It: Perform a forward crawl (or freestyle) like you learned when you were 6 years old. (If you don’t know how to do this, you can’t swim, and you should stay the hell out of the deep end.) Do 4 x 25 meters, and add distance when you need more of a challenge.