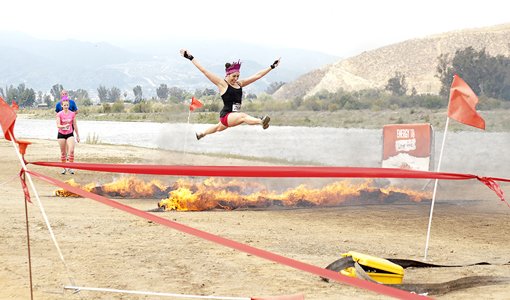 I exercise often, but I only run when hordes of flesh-eating zombies are hot on my trail. (In other words, I never run.) I figured signing up for the Warrior Dash — a “mud-crawling, fire-leaping, extreme 5K from hell” — would force me to dust off my running shoes and train hard for something. I needed to be motivated by fear.

A month before the race I mapped out a progressive running schedule that would begin at a mile a day and gradually build to daily six-mile runs the week of the event. I also created a weight-lifting plan that included more bodyweight exercises like push-ups, pull-ups, and knee jumps, along with compound lifts like the deadlift, bench press, and squat.

However, that whole thing didn’t exactly work out. I barely ran a couple of miles a handful of times, but I ended up making it through the race anyway — in fact, I even learned some lessons I plan on using for future mud runs. Lessons like …

1. Most Mud Runs Are Similar
Whether you choose to run a Warrior Dash, Spartan Race, Gladiator Rock’n Run, or some equally goofy-sounding local mud run, the model for the course or its obstacles won’t differ too drastically. The exception, I was told by a mud-run veteran, is the Tough Mudder, a 10- to 12-mile obstacle race designed by the British Special Forces that’s longer and more grueling than most other mud runs.

2. You Can Overcome the Obstacles
I feared the Warrior Dash course would be a cross between the gauntlet from Running Man and the Eliminator from American Gladiators: swimming in mud, jumping over fire, climbing cargo nets. I did those things, but pretty much anyone in halfway decent shape could. The idea behind mud runs is to get people to have fun; it’s not about crowning the toughest SOB alive.

3. You Can Run The Course Drunk
A few Ninja Warrior types cared about their times — the top three finishers are awarded prizes — but most people were there to get dirty and drink. In fact, everyone got a chip for a free beer, which was good because a cup of beer cost $8 (it was $20 if you wanted it in your own commemorative stein). But lots of people had clearly cut down on beer costs by tailgating in the parking lot beforehand.