From poles stuck up urethras to metal hemorrhoid nooses, we’ve found some terrifying surgical instruments that must have been worse than death. Who wants to play doctor? 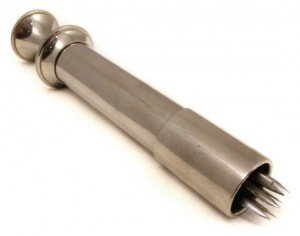 Artificial Leech (1840)
Leeches were once the most popular choice for bloodletting, which was the removal of blood to cure or prevent disease. While bloodletting was, go figure, eventually found to do more harm than good to patients, an anticoagulant called hirudin found in leech spit continues to be used to help patients heal from reconstructive surgery. Unfortunately, 19th century doctors didn’t know either any of that, and so they thought it would be a good idea to start using the artificial leech, a more efficient and sterile bloodletting method. The aluminum bat with rotating spikes popping out its end would lacerate the patient’s skin and the cylinder (the bat’s handle) would then vacuum up the blood.