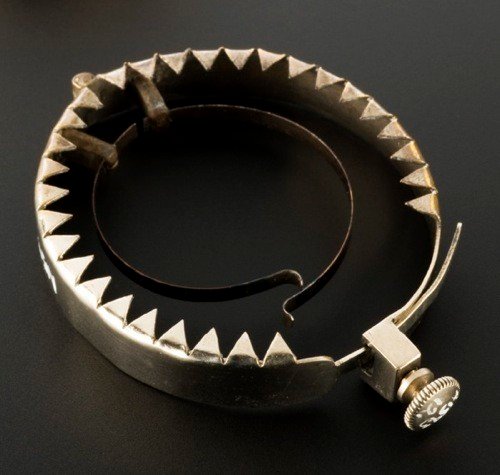 Jugum Penis (1880s-1920s)
Why was the penis bear trap invented? Why, to prevent young men from suffering the terrible fate of spermatorrhoea of course. What the hell is spermatorrhoea? Basically, it’s having a wet dream. A clip attached the ring to the base of the penis, and if you were unlucky enough to have a sexy dream, the jagged edges would greet your little soldier with a love tap. Of course, dudes get hard pretty much every night no matter what, so victims would have had this nightmare to look forward to every time they went to sleep. (Also, yes, we’re aware it’s not technically a surgical tool, but it’s a penis bear trap.)