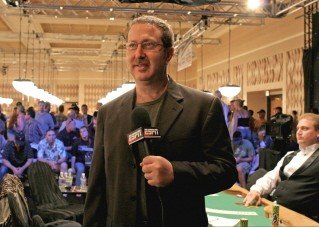 When poker junkies watch the finale of the 2010 World of Series Poker Main Event on ESPN Nov. 9, they won’t just be hearing analysis — they’ll be hearing ex-wife jokes.

That’s thanks to Norman Chad, the longtime sports, gambling, and humor writer who’s been a WSOP commentator since 2003. Recently Chad chatted with us about great poker, hilarious divorces, and what the hell “Swagglefoosed” means.

How’d you become the Vin Scully of poker?
Basically it was because a friend thought I had a gambling problem. The job practically fell out of the sky into my lap; I was doing other work for ESPN in 2003 when they decided to do more poker coverage, and the friend called me up because he wanted me to consult. Nobody had ever done anything like this before, and one thing led to another until they asked me to be the commentary guy. I figured it’d be a one-time thing — and then the poker boom hit.

What were those first few episodes like?
I was totally out of my element. The WSOP was at Binion’s back then, and I walked in the first day and asked the producer, “Where’s our vantage point?” He laughed at me because the truth is that we do most of our commentary work in a studio after they’ve edited each telecast down.

So how does that work?
It’s pretty unglamorous. [Cohost] Lon [McEachern] and I sit in a sound studio in New York watching the episode just like people do at home. We give play-by-play about it as if we’re sitting there courtside. It’s like Mystery Science Theater 3000.

Do you prepare scripts for the broadcasts?
We both have the opportunity to watch the segment beforehand, but when we’re in the studio, both of us are doing it off the tops of our heads. Because I’m the color guy, I usually just react to what I see. As the years have gone by, I’d say I spend more time thinking about what I’m going to say before each segment. The good thing is that since it’s taped, we have the ability to go back and re-record something that we don’t like — and in my case, I can make it funnier.

Like all those ex-wife jokes you make?
Those have been a big hit. On air, I think I’ve said I’ve had four or five marriages, but really it’s only been three.

Do you have wives sign pre-nups allowing you to talk about them in front of millions of people?
No, for the most part they know what to expect … though some have minded the on-air attention a bit more than others.

What about some of your other famous phrases? Where do those come from?
All over, really. “Squadoosh” I used to say in college. Other ones, like “Whamboozled,” “Swagglefoosed,” and “Scallywagged,” I’ve developed or adopted over the years. What’s funny is that when I play at my local card room [Hollywood Park, near Los Angeles], I have a separate language entirely that I haven’t transferred to my broadcasts.

When you play poker, what’s your game?
I’m exclusively an Omaha and Stud guy. I seldom play Hold ‘Em in cash games.

You’re about to head to the Final Table in Vegas. What will you do there?
In the early rounds of the Main Event, I track down good stories. At the final table, I’ll just be there to pick up on nuances and listen to table-talk. Generally, the atmosphere at these tournaments is something you have to experience to believe. When I was a kid, my family raised Siberian huskies and we’d go to dog shows all the time. Poker tournaments are like dog shows; they both attract insular, myopic groups of people — but poker players whine a lot more.

What challenges does the live format of the Final Table present behind the scenes?
For the production team, it’s entirely different. Normally they have six weeks to edit down a one- or two-hour telecast. With the final table, they have 24 hours. For Lon and me, though, it’s really not that different. We do the same thing as always, but with less prep time, and in a different studio. Face it: Commenting on poker isn’t exactly open-heart surgery. They just pay me to sit there and talk.