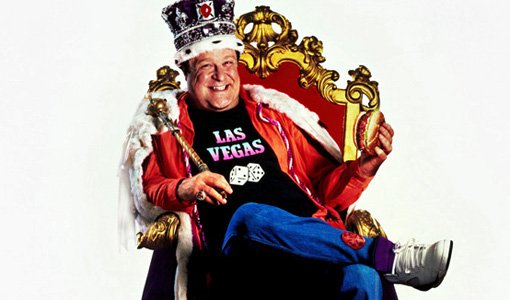 Here’s some bad news from the Debbie Downers at the Pew Charitable Trusts: They’ve found that a mere 4 percent of people who grow up in families mired in the bottom fifth of the household income bracket wind up making it into the top fifth as adults. In other words, if you’re born poor, the odds are overwhelming that you’re going to die poor.

(But there’s good news if you’re well off! Only 8 percent of people born into the top fifth wind up in the bottom fifth as adults.)

If there was any good news from the study, it was that half the country is earning a higher adjusted income than their parents were at the same age. Of course, that’s tempered by the bad news that they tend not to own more assets or have more savings. (Translation: They’re blowing their money on stupid sh*t.)

Bummed out enough yet? Well then make yourself feel better by blowing your money on one of these rags-to-riches movies.

TRADING PLACES (1983)
Con-man Billy Ray Valentine (Eddie Murphy) is in the right place at the right time when the wealthy Duke brothers make a bet about whether or a petty thief from the mean streets of Philly can be made into an aristocratic trader, and a trader (Dan Aykroyd) could have his life simultaneously destroyed. It’s hilarious and features Jamie Lee Curtis’s amazing boobs.

THE JERK (1979)
After learning he was an adopted member of the poor African American family of sharecroppers that raised him, Navin Johnson (Steve Martin) leaves the nest and finds odd jobs to support himself. While working at a gas station, he invents the Opti-Grab, an asinine-looking apparatus that secures eyeglasses to someone’s head. It sells big, and he strikes it rich! Then he goes broke after a class-action lawsuit wipes him out. Don’t worry, Johnson doesn’t stay poor for long. It’s Hollywood, remember?

ALADDIN (1992)
A kindhearted thief wearing MC Hammer pants discovers a magic lamp with a wisecracking, free-association-loving genie (voiced by a still-funny Robin Williams) trapped inside who grants him three wishes. Aladdin wishes that he become a prince, that he be saved from drowning, and that the genie is set free. Sucker. Still, in the end, he manages to rope Princess Jasmine, who is arguably the hottest of all Disney cartoon princesses.

BREWSTER’S MILLIONS (1985)
Struggling minor league ballplayer Monty Brewster (Richard Pryor) is set to inherit a ton of money. But there’s a catch: He can take $1 million, no strings attached. Or he can spend $30 million in 30 days (there are rules making it harder than it sounds) and inherit $300 million — but if he fails to do so, he gets nothing. Brewster goes big, hires a bunch of people at exorbitant salaries, and teams with his buddy Spike (John Candy) to unload the fortune.

PRETTY WOMAN (1990)
It’s that old fairytale story all little girls dream about: A prostitute (Julia Roberts) working her beat on Hollywood Blvd. hits the jackpot when wealthy businessman Edward Lewis (Richard Gere) hires her to blow him … oh, and to escort him to highfalutin’ social events. The couple proceeds to shop, laugh, bathe, bicker, fly to San Francisco to see an opera, and all the other things rich dudes and street hookers do.

KING RALPH (1991)
What does a crass Las Vegas lounge singer do after he’s fired? No, not die in a shallow desert grave after getting caught up in a meth deal gone bad. He should move to England to claim his crown, of course! A preposterous royal tragedy translates to lots of money for Ralph (John Goodman). At one point he winds up bowling in a castle using antique vases as pins. That’s when you know you have it made.

JOE VERSUS THE VOLCANO (1990)
When you’re a sad-sack, down-on-his-luck factory worker like  Joe Banks (Tom Hanks), and you’re diagnosed with a “brain cloud” and told you have only six months to live, it suddenly sounds like a really good idea to take a bribe that allows you to live lavishly for your final days in exchange for sacrificing yourself in an active volcano. Until, of course you meet a chick (Meg Ryan) who you fall in love with. Sadly, almost no one saw this movie in the theater — who was the marketing genius who thought Hanks and Ryan would pair well in a romantic comedy?!