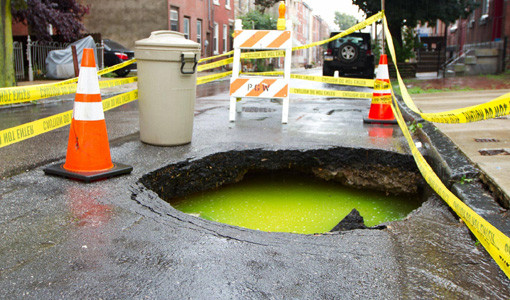 You watched Teenage Mutant Ninja Turtles II: The Secret of the Ooze when it came out back in 1991 because who the hell didn’t. In the film, the reason behind the pizza-loving turtle quartet’s humanistic qualities is credited to an oozy substance that looks eerily similar to what was found in a sinkhole in a Pennsylvania road.

As first seen on Reddit (where else?), one commenter said it was a fluorescent dye added to track water flow. That sounds plausible, we guess. However, it also sounds like something a member of Shredder’s Foot Clan would say.

What do we think? It’s definitely Surge soda, the wannabe Mountain Dew soft drink distributed by the Coca-Cola company until 2002. Still, if we’re wrong, the PA ooze at least provided us an excuse to run Vanilla Ice’s “Ninja Rap” video, and a reason to remind Michael Bay that the TMNT are a product of radioactive slime and not alien visitors from outer space.