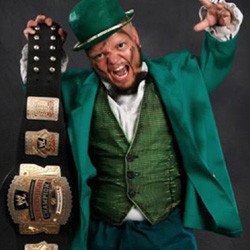 Little Bastard was a feisty fella who lived under WWE wrestling rings and embodied pretty much every Irish cliché in the book … including the one about them not being a very tall people. After wreaking havoc in more than one match when he scurried out from his hiding place and started attacking wrestlers, Little Bastard’s name was mysteriously changed to Hornswoggle. (The guy’s real name Dylan Postl, and he starred as the Leprechaun in WWE Studios’ 2014 reboot. Fitting? We agree.) Look! The belt is as tall as he is!