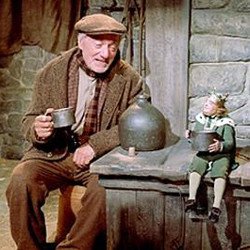 Remember the 1959 Disney movie entitled Darby O’Gill and the Little People? Of course you don’t. But it’s notable because it co-starred a pre-James Bond Sean Connery, who even sang in the movie. (Even his singing voice has a Bond-like quality to it.) King Brian was the king of the little people, and he becomes locked in a prolonged battle of “wits” with a goofy old Irish farmer named Darby. Hey: We never said anything about the plot making sense.