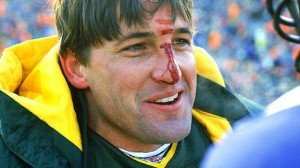 Chuck Cecil
“Is Chuck Cecil Too Vicious for the NFL?” That was the seemingly ridiculous question Sports Illustrated asked on its cover in 1993. Seemingly ridiculous because Cecil was a 6-foot-tall, 180-pound safety. But not actually ridiculous considering the way Cecil threw his body around during his unlikely NFL career, earning the nickname “Scud” — after a kind of missile used during the first Gulf War — and accumulating dozens of fines from the league for helmet-to-helmet hits that often left receivers dazed and Cecil bloodied. Scud had no problems taking on much bigger men and the nature of his blows made him one of the first players to wear a special helmet designed to reduce concussions … the very injury that forced Cecil, now the defensive coordinator for the Tennessee Titans, to retire.